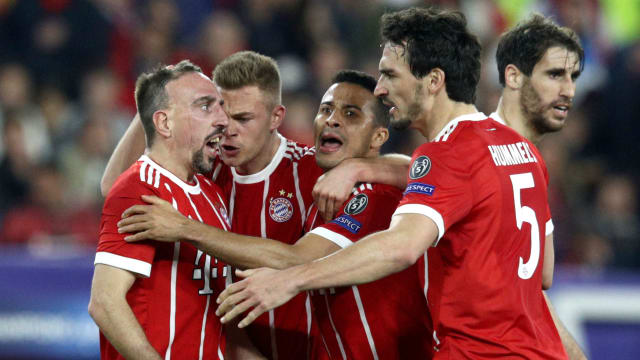 Bayern Munich benefited from a pair of deflected goals to secure a 2-1 away victory over Sevilla in the first leg of their Champions League quarter-final.

Having let slip a two-goal lead to draw with Barcelona at the weekend, Sevilla failed to build on scoring first against the Bundesliga giants to suffer their first home defeat in Europe this season.

Pablo Sarabia controlled Sergio Escudero's early cross from the left to fire the LaLiga side ahead in the 32nd minute, raising the possibility of Vincenzo Montella's side claiming a second major scalp after knocking out Manchester United in the previous round.

However, Jesus Navas' attempt to block Franck Ribery's cross inside only resulted in an own goal, the former Manchester City player's untimely deflection sending the ball beyond goalkeeper David Soria.

The visitors' winner also went in off a Sevilla player, Escudero, albeit Thiago was awarded the goal after heading Ribery's deep delivery from the left towards the target.

Still, Jupp Heynckes - who became the first coach to win 12 consecutive Champions League games - will be relieved to return home with a lead

THAT'S IT!  Quite an impressive fightback from our boys  We take a 2-1 lead back to Munich #packmas#UCL#SFCFCB 1-2 pic.twitter.com/fa3ONJWnti

Brilliant in a 6-0 win over Borussia Dortmund on Saturday, they were surprisingly subdued in the first half.

In contrast, the hosts were sharp and incisive in attack, deservedly taking the lead when Sarabia caught out a snoozing Juan Bernat to fire beyond Sven UIreich, albeit his initial touch to set up the opportunity appeared to be with his left arm.

13 - Bayern have conceded a goal in each of their last 13 away Champions League games - their joint-longest such run in the competition (also a 13-game run ending in Dec 2000). Guest. #SEVBAY

The left-footed finish made amends for an earlier miss with his right, Sarabia failing to even hit the target after a block by Mats Hummels fell perfectly into his stride just as he arrived inside the penalty area.

However, Sevilla's advantage lasted less than five minutes. Bayern made the most of a rare foray forward - as well as a large slice of luck - to grab an undeserved equaliser.

Ribery was aiming for a team-mate in the middle but Navas inadvertently provided the finishing touch, Soria, surprisingly selected ahead of Sergio Rico by Montella, unable to react in time to prevent the ball out at his near post.

Javi Martinez produced a last-ditch tackle to deny Franco Vazquez a shooting opportunity but it was Bayern who controlled possession in the second half.

Soria denied Martinez from making an impact at the opposite end of the field, turning away the Spaniard's volley, but could do little to prevent Thiago's winner.

Ribery's cross found his team-mate unmarked at the back post and while he nodded the ball back towards the target, Escudero's contact prevented his goalkeeper from making a comfortable save.

Sevilla will have Ever Banega back for the return leg, and they did triumph 2-1 at Old Trafford to qualify for the last eight, but Bayern will be the strong favourites to reach the semi-finals when battle resumes on German soil next week.