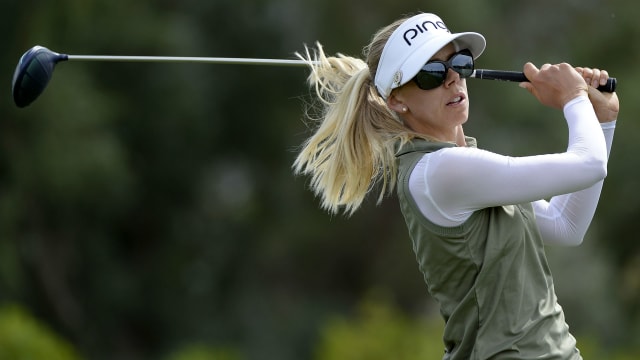 Pernilla Lindberg claimed her first career victory with a major triumph after coming out on top in a marathon ANA Inspiration play-off with Inbee Park at the eighth extra hole.

Lindberg and Park had to return on Monday to complete their duel at Mission Hills Country Club after they could not be separated in four additional holes on Sunday, though Jennifer Song was eliminated.

There was nothing to choose between the two on a glorious day in California until the 95-ranked Lindberg sunk a magnificent birdie putt at the 10th and Park's bid for an eighth major ended when her putt rolled to the left of the hole.

Lindberg might have thought her chance had gone when she missed a more straightforward chance to take the title on the seventh extra hole, but the Swede showed great character to put that behind her and win it with a bold putt from around 25 feet.

Worth another look! @pernillagolf drains this birdie putt to win @ANAinspiration.

There's nothing left but that famous splash - coming up @GolfChannelpic.twitter.com/Itie6AZvHM

Neither player could not muster a birdie in the first three holes of the day, before Lindberg finally settled it, the 31-year-old celebrating by jumping into Poppie's Pond.

"I just know I'm a grinder, I just felt this is mine, I'm going to do this," Lindberg said, before making a splash with her parents and caddie.

We call that jump a perfect 10!