Bayern in 'no hurry' to strike permanent James deal 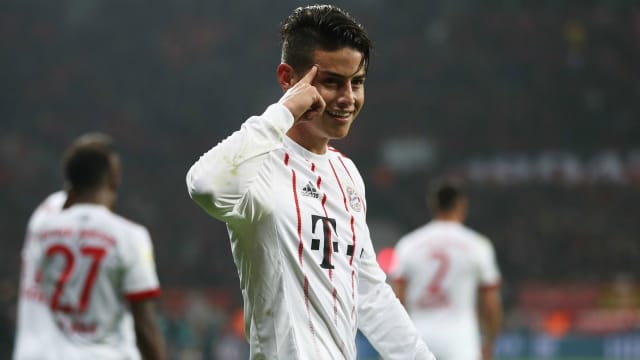 Bayern Munich are in no rush to finalise a permanent deal for James Rodriguez, according to chairman Karl-Heinz Rummenigge.

A report in Marca claimed the Bundesliga leaders have decided to activate the EUR42million option that was included in James' two-year loan from Real Madrid.

Rummenigge is delighted with the 26-year-old, who scored one and set up another two in Bayern's 6-0 thrashing of Borussia Dortmund last weekend, but is not anxious about his future.

"There is no hurry," Rummenigge said before Bayern travelled to Spain for Tuesday's Champions League clash with Sevilla.

"We have very clear conditions in terms of the contract. We have a two-year loan deal and then a purchase option of 42 million [euros] that we will have to take up."

James was signed by Carlo Ancelotti but has begun to thrive since the Italian was replaced as head coach by Jupp Heynckes in October.

Rummenigge, though, was keen to praise Ancelotti for his foresight in bringing the Colombia international to the club.

"We are completely happy with his development, especially since Jupp Heynckes became coach," he said. "He is a very, very good transfer and I have to congratulate Carlo Ancelotti again for that."

While James is expected to move to the Allianz Arena from Madrid, there are persistent reports that striker Robert Lewandowski will head in the opposite direction at the end of the season.

However, Rummenigge is not concerned about rumours surrounding Bayern's star players.

"Honestly, it does not worry me," he said. "When I was still a player, these rumours came up monthly, then they emerged weekly, now they come up daily and soon probably hourly.

"Honestly, I handle these rumours in a very relaxed way. But the crucial factor is the length of the contracts.

"I read a rumour about Thiago [Alcantara]. These rumours will come up now, not only at Bayern Munich, but also at Borussia Dortmund and all the other big clubs. That is your [the media's] job. We have to deal with it. It is good advice to be relaxed about it."

Rummenigge added that the club do not expect to make any announcement about a new permanent head coach until the end of the month at the earliest.

"In the past, we didn't take a stand relating to the subject of a new coach, and we will not take a stand in the future either," he said. "We will wait and see. I have already said, I expect that we will present a new coach at the end of this month. You have to be patient."