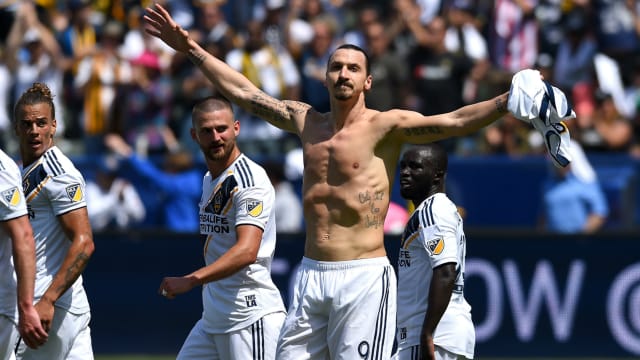 Saturday was all about Zlatan Ibrahimovic in MLS as the LA Galaxy star enjoyed a Hollywood-style debut with two goals, while New York City stayed unbeaten.

A 40-yard stunner and a 91st-minute winner were on the script as debutant Ibrahimovic came off the bench to lift the rallying Galaxy past city rivals Los Angeles FC 4-3.

The Galaxy were staring at a comprehensive defeat against high-flying LAFC, who led 3-0 at Stubhub Center thanks to Mexico international Carlos Vela, with Ibrahimovic watching from the bench.

Needing a response, former Manchester United forward Ibrahimovic -- who only arrived from England on Thursday -- was introduced in the 71st minute and equalised six minutes later after Sebastian Lletget and Chris Pontius began the fightback.

The 36-year-old, however, was not done there as his header capped an unforgettable introduction to American football in the first minute of stoppage time.

Villa was a late withdrawal through injury, however, NYC preserved their undefeated record thanks to Anton Tinnerholm and Maxi Moralez.

NYC are three points clear atop the Eastern Conference, ahead of Columbus Crew, who lost 2-1 at home to Vancouver Whitecaps.