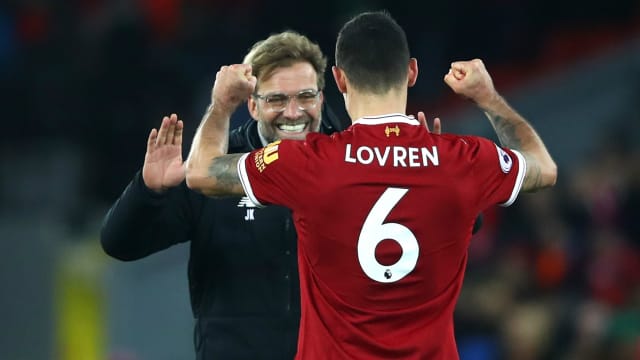 Liverpool defender Dejan Lovren says Jurgen Klopp thinks he can become one of the world's best defenders, despite what the Croatian considers to be unfair criticism.

The centre-back has been singled out for some high-profile mistakes this season, particularly in Premier League defeats to Tottenham and Manchester United.

Lovren was taken off after just 31 minutes of a 4-1 loss to Spurs at Wembley last October, but he only missed three of Liverpool's next 14 league matches, during which they went unbeaten.

The 28-year-old says support from his manager has been helpful amid the scrutiny on his performances from outside the club.

"When he took me out at Spurs, I was fuming," Lovren told The Sunday Times. "But after, when we spoke, it took a couple of days then he invited me into his room.

"I wanted answers but he said positive things. He said: 'If you just think about yourself like I think about you, you will be one of the best players in the world.'

Which one has been your favourite? Vote now: https://t.co/MlkbwQJYZcpic.twitter.com/zTtsqNOmP3

"You know maybe, it's sometimes just... just my self-confidence disappears in some moments. And he believes in me, you know? And I believe in him.

He continued: "Everyone makes mistakes, but I play one bad game in 18 and everyone says, 'Look, look, look.' Why? I don't deserve that. People don't see me in the 'small' games. They see 5-0 against Porto but nobody sees my part.

"It's a challenge. A personality challenge. After a mistake, are you ready to move on? I did it straightaway after Spurs when I was in that record of 18 games unbeaten. Big players don't need six or seven games; big players in the next game prove you wrong.

"But some people don't care about that Dejan. They're just searching for the next mistake."