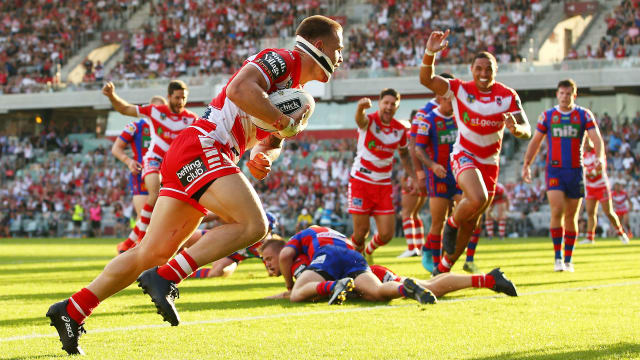 St George Illawarra Dragons maintained their 100 per cent record in this season's NRL with a 30-12 victory over Newcastle Knights, while Gold Coast Titans ended an 11-year wait for a win at Suncorp Stadium on Sunday.

The Dragons fell behind early but ran in five tries to reel off a fourth straight win at the start of the 2018 season, in the process drawing them level with New Zealand Warriors at the top of the table.

After Newcastle scored first through Tautau Moga's converted try, the hosts hit back with an 18-point blitz in the space of 11 first-half minutes at WIN Stadium.

Chris Heighington cut the deficit by plunging over for the Knights, but a Gareth Widdop penalty made it 20-12 at the break and the Dragons shut out their opponents in the second half while adding tries from Leeson Ah Mau and Nene Macdonald.

The Titans lost 54-8 to the Dragons last time out but bounced back in style in Brisbane, upsetting the Broncos 26-14 in front of a crowd of 30,742.

Phillip Sami and Dale Copley touched down inside four minutes as Garth Brennan's side caught their Queensland rivals cold in the opening stages.

Winger Sami went on to grab a hat-trick while also setting up another score, with his cross-field kick assisting Anthony Don's 44th-minute try.

The Titans are now level with the Broncos on four points in the standings after claiming their first victory at Brisbane's home ground since 2007.