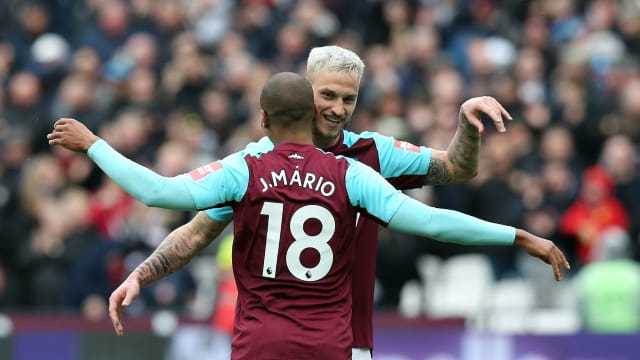 West Ham gave their supporters plenty to cheer as they boosted their Premier League survival hopes with a 3-0 victory over fellow strugglers Southampton.

Three weeks on from the angry pitch invasions during West Ham's capitulation to Burnley, the Hammers turned on the style on Saturday amid increased security at London Stadium.

Home fans were more than happy to stay in their seats as David Moyes' side moved five points clear of the relegation zone, a first-half double from Marko Arnautovic coming after Joao Mario had broken the deadlock.

There was added significance for Arnautovic as he proved to be Mark Hughes' tormentor for the second time this season, the Austrian - who scored against Hughes' Stoke City in December - coming back to haunt his former boss on his league debut in the Saints dugout.

Charlie Austin's return did little to boost the visitors - who failed to have a shot on target - as Hughes slipped to a fourth loss in a first match in charge of a new Premier League club.

The Saints remain embroiled in a relegation fight with seven games to play, Southampton now two points from safety and five behind West Ham - who rise to 14th.

Keen to avoid a repeat of the ugly scenes from their last home game, West Ham were immediately on the front foot and it paid dividends with two early goals.

With 13 minutes on the clock, a stray pass from Mario Lemina was intercepted by Hammers skipper Mark Noble, who released Cheikhou Kouyate to charge at the Southampton defence.

The midfielder's cross found Joao Mario in acres of space and he lashed the ball beyond Alex McCarthy.

Kouyate and substitute Edimilson Fernandes wasted chances to stretch their advantage, but Arnautovic made no mistake in first-half stoppage time with a crisp volley from Arthur Masuaku's deep cross.

3 - @WestHamUtd have scored three first-half goals in a Premier League game for the first time since September 2012 against Fulham. Response.

A more relaxed West Ham returned after the break as confidence began to grow both on and off the pitch, Moyes' men keeping Southampton at bay as the visitors looked to mount a comeback.

Despite enjoying more possession than their hosts early in the second half, Southampton failed to test Joe Hart with anything other than dangerous crosses - the England goalkeeper handling them with aplomb.

Arnautovic went close to completing his hat-trick just after the hour on a rare foray into Southampton territory, but his curling effort was just wide of McCarthy's left-hand post.

The treble would not come as his day came to an early end - Jordan Hugill replacing him - but the 28-year-old had already done enough to lift the mood around London Stadium.