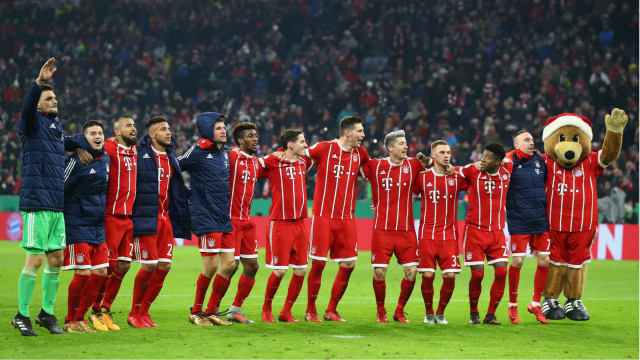 Bayern Munich's incredible first-half display made light work of Borussia Dortmund as the runaway Bundesliga leaders cruised to a remarkable 6-0 win in Der Klassiker thanks to a hat-trick from Robert Lewandowski against his former club.

Despite their chance to claim a sixth straight Bundesliga title being temporarily put on hold due to Schalke's victory over Freiburg earlier in the day, Bayern wasted no time in dismantling their arch-rivals with an awe-inspiring performance in the opening 45 minutes.

Jupp Heynckes' side, who can be crowned champions against Augsburg next time out, were 3-0 up inside 23 minutes - Thomas Muller, who had teed up Lewandowski to open the scoring, applying the finishing touch to a terrific cross from James Rodriguez, who had netted Bayern's second

Franck Ribery had a goal ruled out shortly before James' goal and played a crucial part when he combined with Lewandowski to bundle in another on 44 minutes.

Ribery got himself a goal in first-half stoppage time, though, prodding home a powerful strike, with Mario Gotze's second-half effort against the post the closest Dortmund came to a consolation before Lewandowski completed the rout in the 87th minute.

While Peter Stoger will reflect on his unbeaten run as Dortmund boss in the Bundesliga coming to an end in the most humiliating fashion, Heynckes will now switch attention to Bayern's Champions League quarter-final tie with Sevilla.

5 - Dortmund haven't conceded 5 goals in the first half of a #Bundesliga game since April 1978 (0-12 in Mönchengladbach) when they were down 0-6 at half time. Catastrophe. #FCBBVB

Muller looked sharp from the off, and the forward hooked wide with an acrobatic attempt inside three minutes.

Bayern were in front two minutes later, though - Muller turning provider with a brilliant throughball in behind Dortmund's line and Lewandowski, having timed his run to perfection, duly slotted home.

Ribery thought he had doubled Bayern's tally moments later, only for VAR to adjudge the Frenchman had strayed offside before latching onto James' flick.

Heynckes' side were not to be denied a second from their next attack, however - James on hand to thump in his fifth goal of the season from David Alaba's cut-back.

Bayern did not let up and Muller soon got in on the act, cushioning a close-range finish over Roman Burki at the end of a wonderful counter-attack.

It soon went from bad to worse for Stoger's side as Ribery charged his way into the area and, despite seeing Burki save his effort, the winger was on hand, along with Lewandowski, to force the rebound over the line.

There was no doubt over the fifth goal, however, as Ribery latched onto James' throughball before planting a superb finish high into the net.

Bayern's domination continued following the restart, though Dortmund managed to stem the tide until Arjen Robben saw a close-range strike saved by Burki on the hour.

Ribery's temper threatened to get the better of him when he clashed with Julian Weigl soon after, though both players escaped with a booking.

Lewandowski had the final say, however, nudging home from close range to complete his hat-trick with three minutes remaining and inflict further humiliation on the visitors.

- Dortmund slipped to their highest defeat in a competitive match in 27 years (a 7-0 loss in February 1991 at Stuttgart).
- It was also Dortmund's second-heaviest defeat against Bayern, only surpassed by a 11-1 loss in November 1971.
- For the first time, Bayern beat Dortmund in three competitive games in the same season.
- Robert Lewandowski scored a hat-trick in back-to-back home games and has now scored 26 goals in the Bundesliga this season, twice the amount of nearest rivals Pierre-Emerick Aubameyang and Nils Petersen.