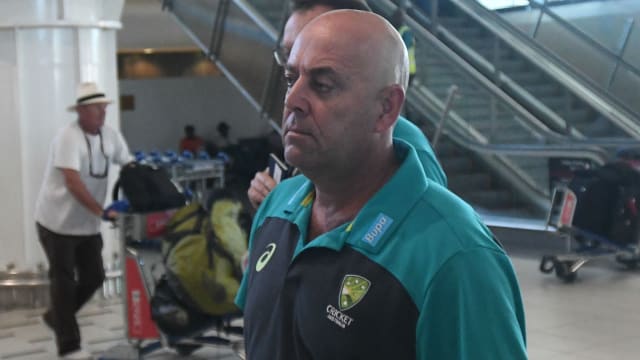 Darren Lehmann knows Australia must change their ways following the ball-tampering scandal and suggests taking a leaf out of New Zealand's book after admitting they have "butted heads on the line".

Australia head coach Lehmann on Wednesday broke his silence to confirm he will not step down after a Cricket Australia (CA) investigation concluded he had no knowledge of plans for Cameron Bancroft to tamper with the ball at Newlands.

CA banned captain Steve Smith and vice-captain David Warner from international and domestic cricket in Australia for a year, a sanction which they can appeal against, after looking into the incident in Cape Town on Saturday.

Bancroft was given a nine-month suspension - which he is also entitled to challenge - and Lehmann says now is the time for Australia to alter the way they approach the game, citing the Black Caps as an example of how to conduct themselves.

Lehmann said: "I'm not going to resign as was said [by CA chief executive James Sutherland]. We need to change how we play and within the boundaries we play.

"Obviously previously we've butted heads on the line but that's not the way to go about us playing cricket moving forward. The thing for me would be if we take a leaf out of someone like say New Zealand's book, the way they play and respect the opposition.

"We do respect the opposition but we push the boundaries on the ground. So we've got to make sure we're respecting the game, it's traditions, and understanding [how] the game holds itself around the world.

"I acknowledge James' comments into the review of the culture of the team and the way we play our cricket and we are all open and ready to assist in this process.

"The team has been received quite negatively in recent times and there is a need for us to change some of the philosophies about the way we play.

"It was a grave mistake by three young men and we have to try and win the public back now and play the type of cricket that they expect us to play.

"We have to look at how we go about that, as a coach and support staff and playing group, and make the game better for everyone to play and enjoy watching us play.

"The whole group is upset and we understand the enormity of it and the public perception. So for us, it's just trying to win the fans back over and play the best cricket we possibly can."