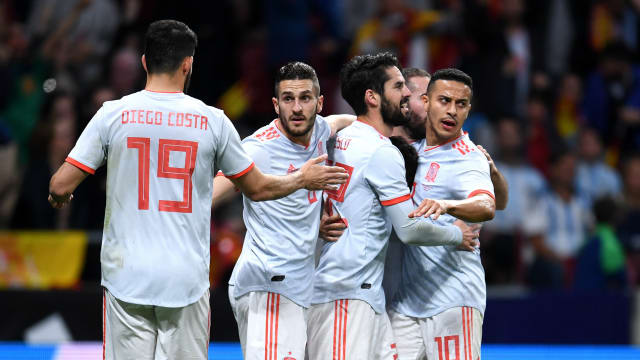 Isco struck his first international hat-trick as Spain extended Julen Lopetegui's unbeaten run as coach to 18 matches with a supreme 6-1 demolition of Argentina in Madrid on Tuesday.

Spain were pegged back by Germany for a 1-1 draw on Friday but Argentina - without Lionel Messi due to injury - fared far worse than the reigning world champions.

Diego Costa put Spain in front, Marco Asensio then adding his second assist of the game by setting up Isco, although Nicolas Otamendi headed one back for Argentina before the break.

That proved a mere consolation for the visitors at the Wanda Metropolitano, though, with Isco on target again shortly after the restart to put Spain in total control.

The Real Madrid playmaker continued to build on an eye-catching individual performance by helping to tee up Thiago Alcantara for Spain's fine fourth, Lopetegui's side sending a warning shot ahead of the World Cup with a fifth via substitute Iago Aspas, who set up Isco to claim the match ball soon after.

142 - Including the game against Spain, Javier Mascherano equals Javier Zanetti as the most capped player for Argentina. Chief. pic.twitter.com/9KrL9fxzYm

The visitors should have taken the lead in the eighth minute, Gonzalo Higuain getting in front of Sergio Ramos in the box but cushioning his effort from a left-wing Maximiliano Meza cross wide.

Spain soon punished that miss as Costa scored from close range, although he was hurt in the process by colliding with Sergio Romero.

Andres Iniesta won the ball deep in Argentina territory, with Asensio poking a pass through for Costa to beat Romero to the ball and finish bravely. Both players were initially able to play on after a lengthy delay for treatment, although Romero was then substituted.

Meza almost marked his first international appearance with a goal but Ramos made a fine interception after the debutant swapped passes with Higuain and shaped to shoot.

Argentina grabbed a goal back in the 39th minute as Ever Banega's left-wing corner enabled Otamendi to beat Ramos in the air and power a downward header through David de Gea's grasp.

Spain were suddenly rampant with Isco turning provider, the midfielder finding Aspas, who touched the ball on for Thiago to slam home.

Spain have a fourth against Argentina and it's @Thiago6! #MiaSanMia#ESPARGhttps://t.co/zExek3RRzI

Ramos appeared to have tucked away another for the hosts, firing in Asensio's cross, but the goal was disallowed for a push, Otamendi then close to a second but seeing his header clip the outside of the post.

Spain are known for possession football but a long De Gea kick down the middle allowed Aspas to add his name to the scoresheet, Caballero beaten far too easily after racing out of his area, with the striker then teeing up Isco to steer home his hat-trick goal.

Tempers threatened to boil over in the closing stages as Argentina lost their composure, while Dani Parejo came off the bench to make his Spain debut and cap a fine night for Lopetegui, whose side look the team to beat in Russia.

For Sampaoli, he can only hope the Messi factor will provide the spark his side clearly needs to be a threat come June.