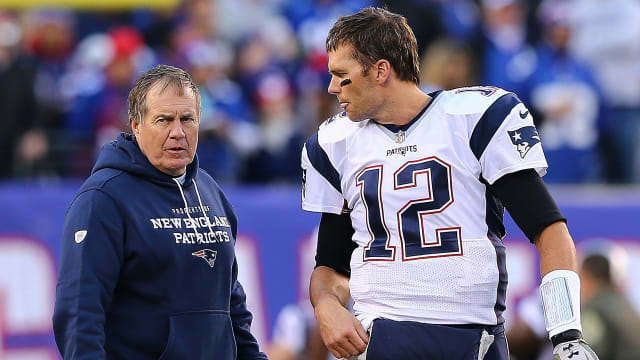 The Patriots were upstaged by the Philadelphia Eagles in the NFL Super Bowl in February, triggering reports of tension within the New England organisation.

Speaking to reporters on Monday, Kraft said: "We met, and I meet individually with each of them.

"But the thing that I don't know if it's completely understood: Bill and Tom meet a lot and spend a lot of time communicating. I think the residual of this loss was really hard on everyone, but I sort of see that as a high-class problem."

Kraft added: "I've owned the team 24 seasons, and I've had Bill as a head coach for 18 of those seasons. When I think of tension, I think of my first year as an owner.

"I love Bill Parcells, but players walked on eggshells and maybe ownership did as we went down the learning curve of how to get along. ... The so-called tension gets greater when you lose."

Veteran QB Brady added fuel to his retirement fire during the final episode of his 'Tom vs. Time' documentary on Facebook.

Asked about Brady, Kraft replied: "I think anyone right after a Super Bowl loss -- fortunately we've had the privilege to go to nine of them. Probably we're not quite as jaded, but the loss -- except for winning the first one, when you lose, the feeling of losing [overtakes] the [joy] of winning.

"I think Tommy is in that category. I think Coach has been wise and he's told players and people that you don't make any decisions, or go public, with feelings in that few weeks after the Super Bowl loss.

"On the other hand, that piece that Tom did, I think was a great piece for our fans. I think we as a league have to do more of that. I think we have to focus on the game on the field and player safety, and I think we have to bring fans more into our world so they can see how great these players are."

As for tight end Gronkowski, talks of early retirement to pursue an entertainment career have muddied his outlook for 2018.

"I saw him a few weeks ago come into the building after hours," Kraft said. "I should say one thing when it comes to Gronk: I've met a lot of people in my life and I've never met anyone like him. If the good Lord lets us come back as someone, I've said it before, he's the most carefree, happy, up kind of guy. I must say, I sort of got excited seeing him vault up on Shaq's shoulders.

"For a guy that size, to be able to hop up on a 7-2 or whatever Shaq is, that's pretty cool. It speaks well to his potential athletic moves this coming year."