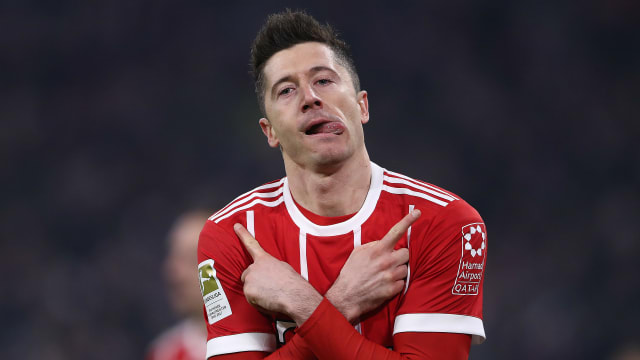 Bayern Munich chairman Karl-Heinz Rummenigge has ruled out selling Robert Lewandowski, who is reportedly a target for Real Madrid.

The 29-year-old, who has scored 32 goals this season, has been heavily linked with a move to the Santiago Bernabeu at the end of the campaign, with the European champions said to be eager to bring in a new striker to compete with Karim Benzema.

Lewandowski's decision to make Pini Zahavi his new agent has encouraged talk that he wants to bring his four-year spell at Bayern to an end.

However, Rummenigge pointed to a failed attempt from Chelsea to sign Franck Ribery 10 years ago as proof that the Bundesliga champions will not be forced into selling their best players.

"I always like to remember 2008, when we had an amazing offer from Chelsea for Franck Ribery," he told Kicker.

"From that day on, the whole football world knew: nobody can buy a Bayern Munich player against Bayern Munich's will.

"I want to assume that Robert is 100 per cent going to play for Bayern next season."

Rummenigge also denied Bayern are interested in signing Bordeaux winger Malcom, who has been linked with a number of top European clubs.

The Brazilian has been tipped to move to the Allianz Arena as a long-term replacement for Ribery and Arjen Robben, but Rummenigge dismissed the suggestion as "a hoax".