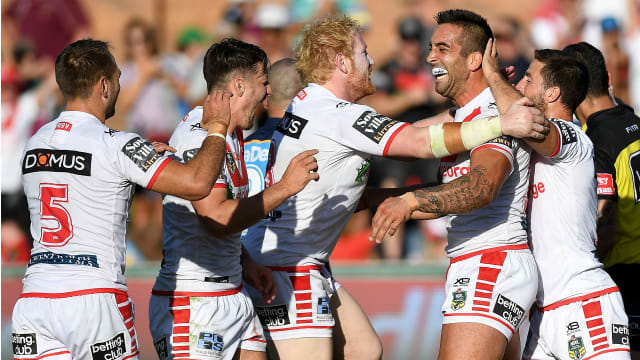 St George Illawarra Dragons ran in nine tries against a woeful Gold Coast Titans side as they romped to a 54-8 victory at Clive Berghofer Stadium on Sunday.

The Dragons had won their opening two matches of the season and never looked in danger of being halted by the Titans, who have now suffered back-to-back defeats.

Tim Lafai and Matthew Dufty both crossed for hat-tricks in a slick demolition job, while Gareth Widdop contributed 18 points with the boot.

The Dragons are one of only two sides, along with New Zealand Warriors, to have won all three of their matches so far this season, while Newcastle Knights' perfect start came to an abrupt end.

That's a hat-trick for Lafai!#NRLTitansDragons#NRLpic.twitter.com/NumcM9hFvP

After wins against Manly Sea Eagles and Canterbury Bulldogs, the Knights were torn apart by Sydney Roosters at Allianz Stadium, losing 38-8.

Blake Ferguson touched down twice, while Latrell Mitchell added five successful conversions to his opening try. Cooper Cronk and Luke Keary were superb throughout - scoring one apiece and setting up the rest.

Victory for the Roosters pulled them level with the Knights on four points.

The @sydneyroosters have put on a show to defeat the @NRLKnights!#NRLRoostersKnights#NRLpic.twitter.com/YpDTk3gozf