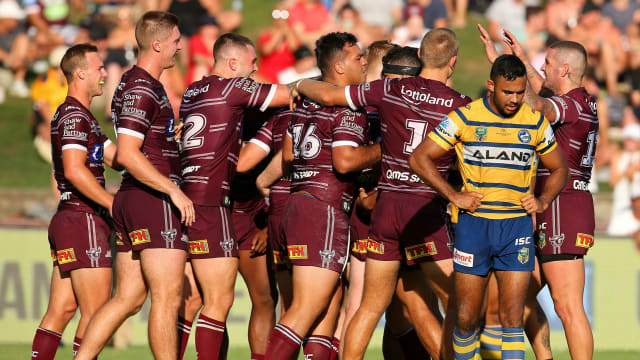 Manly Sea Eagles claimed their biggest win over Parramatta Eels with a 54-0 thumping at a scorching Lottoland, before Newcastle Knights fought back late to beat Canberra Raiders.

The Sea Eagles ran in nine tries - five in the first half - from eight different scorers, with Daly Cherry-Evans punishing the error-strewn Eels by kicking nine out of 10 goals as he finished the match with 22 points.

Cherry-Evans took less than four minutes to open the scoring, bouncing off a tackle from Corey Norman and running across the line before forcing himself over.

Trbojevic benefited from a similarly sensational pass from Lloyd Perrett to continue the onslaught after the restart and Sironen got his second before the hour mark.

What about the offload from Lloyd Perrett!

And Jake Trbojevic is right there in support!#NRLManlyEels 36-0 after 55 minutes.#TelstraPremiership#NRLpic.twitter.com/Cj2NhjNaW8

Efforts from Perrett and Jorge Taufua, the only member of the Sea Eagles' back five to cross as Parramatta were destroyed through the middle, completed a resounding first win for Manly and a second successive defeat for the Eels.

After overcoming Trent Barrett's Sea Eagles in golden-point extra time last week, the Knights made it two from two by edging out the Raiders 30-28.

Jordan Rapana scored a hat-trick the last time these sides met and he stretched out in the right corner to cancel out Aidan Guerra's opener.

A double from Elliott Whitehead, the first after Rapana did superbly to keep Sam Williams' kick in play, helped Canberra build an eight-point lead.

But Connor Watson and Sione Mata'utia, who benefitted from Mitchell Pearce's quick hands, crossed in the final 16 minutes to snatch another late victory.

"You could feel it coming!"

It's not over yet.#NRLRaidersKnights 28-30 with 5 minutes on the clock. #TelstraPremiership#NRLpic.twitter.com/RmJid8Bmlj