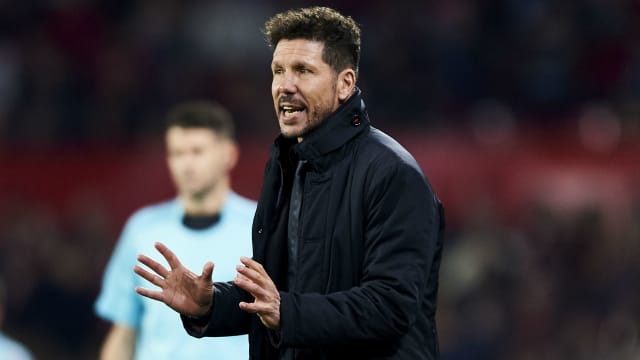 Atletico Madrid are equipped to compete in LaLiga and the Europa League despite their mounting injury list, according to head coach Diego Simeone.

A hamstring injury to Juanfran and the broken leg Filipe Luis suffered on Thursday are the latest misfortunes to befall the team, who were already without strikers Diego Costa and Kevin Gameiro, as well as defender Stefan Savic and goalkeeper Jan Oblak, for the 5-1 victory at Lokomotiv Moscow last time out.

Some of those players are in contention to return for Sunday's trip to Villarreal, but Simeone acknowledges he has been left short of options, particularly given the January departures of Yannick Carrasco, Nicolas Gaitan and Miguel Angel Moya.

"There's no way of knowing that in a squad of 25, six could be injured, nothing is guaranteed in life," he told a news conference.

"Obviously you are always prepared to solve situations that you may encounter.

"I'm not worried, I have a small but important squad. We will compete with the guys that are available.

"Savic, Oblak and Gameiro will train now and we will see how they feel for tomorrow.

"Later we will see [if they are available] when we play against Deportivo," he added, referring to the Liga fixture on April 1.

Filipe Luis is expected to be out of action for approximately two months, although Simeone feels there are candidates capable of taking over from the experienced left-back.

He said: "During the season Luis has had two previous injuries and the team made up for it in the best way. We have Lucas [Hernandez], Sergi [Gonzalez], Saul [Niguez] has done it in that position.

"Lucas is more defensive, but Sergi is growing, [he] trains with us and if it's up to him I hope he does it right."

Friday's draw for the quarter-finals of the Europa League pitted Simeone's side against Sporting CP, who faced Atletico's LaLiga rivals Barcelona in the group stages of this season's Champions League, before dropping into UEFA's secondary competition.

"We have seen Sporting against Barcelona," he said.

"They are competitive, with a very competitive coach [Jorge Jesus], who has been doing very well, with important players in the midfield.

"It is an elimination tie, and we will both be excited to [try and] continue in the Europa League."