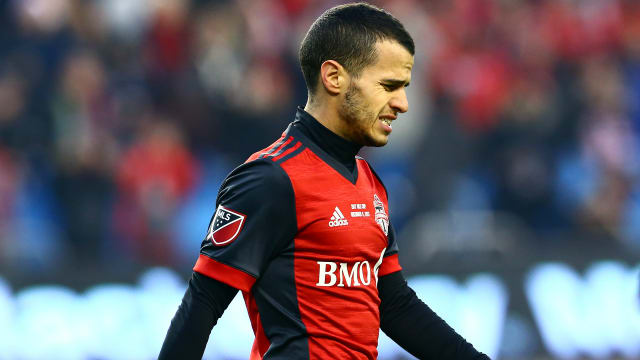 Toronto have been flying high in the CONCACAF Champions League, where they are set to meet Mexican giants America in the semi-finals, but the MLS titleholders have struggled domestically.

And Toronto are still searching for their first win of the MLS season after Jeisson Vargas' deflected shot four minutes before half-time lifted the Impact to victory number one in 2018.

Toronto are rooted to the bottom of the Eastern Conference standings, along with Chicago Fire, who lost 2-1 at Minnesota United.

Atlanta made the most of their numerical advantage as they eased past the Whitecaps 4-1.

Playing in front of 45,000 fans in Atlanta, the hosts crushed Vancouver thanks to Kendall Watson's 13th-minute red card and Josef Martinez's hat-trick.

Watson was dismissed for a foul on Leandro Gonzalez Pirez following a video review and Martinez converted the subsequent penalty.

It was one-way traffic from that point as Aaron Maund scored an own goal in the 58th minute before Martinez added a third on the hour-mark.

Substitute Erik Hurtado managed to pull a goal back for the visitors but Martinez completed his hat-trick with two minutes remaining after heading past Stefan Marinovic.

Make that  goals in  games at @MBStadium#UniteAndConquerpic.twitter.com/NDg0UChb6f

Atlanta are third in the east and three points behind unbeaten New York City, who made it three wins from as many matches thanks to their 2-0 victory over Orlando City.

After a scoreless first half, Ismael Tajouri and Maximiliano Moralez were on target to break Orlando's stubborn resistance at Yankee Stadium.