Anything can happen - Hamsik not giving up on Scudetto 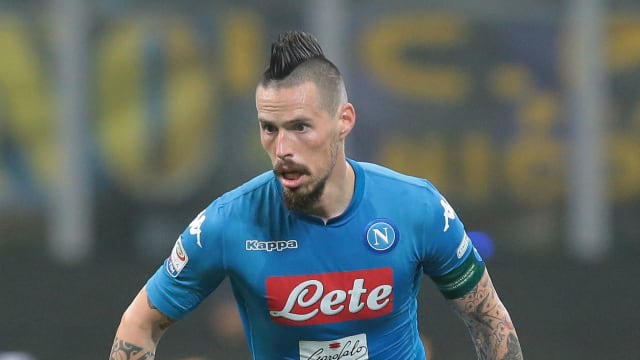 Napoli may have fallen back in the Scudetto race in recent weeks, but captain Marek Hamsik insists Maurizio Sarri's men are not giving up on the title.

The Partenopei have been the dominant force in Serie A this season, having led the way for much of the campaign, but one point from their last two games has seen them slip to second.

Having been beaten by Roma, Napoli drew 0-0 with Inter last weekend allowing Juventus to move above them with victory over Udinese.

Juve's 2-0 win over Atalanta on Wednesday - their game in hand - moved Massimiliano Allegri's side four points clear at the summit, and favourite to lift a seventh successive Scudetto.

Hamsik has not given up catching the Bianconeri, though, particularly with the two sides coming face-to-face on April 22 in Turin.

101 - Napoli have lost from a winning position for the first time in 101 Serie A games, last losing in August 2015 v Sassuolo (Sarri's first game in charge). Streak. #NapoliRoma

"We have to believe to the end, there's still the head-to-head game and Juventus have two tough away games [with Roma and Inter] in the run-in.

"Anything can definitely happen. The league still gives us opportunities, there are so many points and so many games."

With 10 games remaining Napoli can finish the season on 100 points, and Hamsik believes that would be enough to lift the title - despite Juve being able to reach 101 even with defeat next month.

"It's easy to say, but it'll be difficult to do. If we reach 100 points it will bring the Scudetto, maybe that's how it will be," he added.

"So far we've had an exceptional season, we need to continue like this."