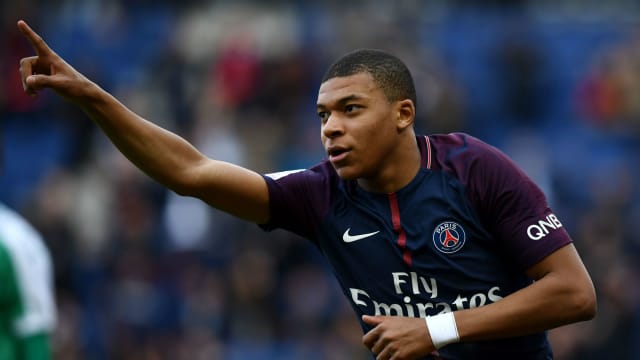 Kylian Mbappe netted a first-half brace as Paris Saint-Germain continued their march towards the Ligue 1 title with a 2-1 win over Angers - despite playing the majority of Wednesday's game at the Parc des Princes with 10 men.

Mbappe's 18th and 19th goals in PSG colours came either side Thiago Motta's red card for raking studs across Romain Thomas - an incident that left the Angers defender with a nasty graze across his ribcage.

Unai Emery's side continued to attack despite being depleted, with Julian Draxler a majestic playmaking influence in midfield, and should have led more handsomely before Angers top scorer Karl Toko Ekambi came off the bench to set up a grandstand finish.

PSG are 17 points ahead of Monaco at the summit having played a game more ahead of Sunday's trip to Nice.

Edinson Cavani entered the game with 24 Ligue 1 goals to his name this season and almost added a delicious 25th, cleverly backheeling Angel Di Maria's left-wing cross to force a sharp save at his near post from Ludovic Butelle.

PSG led in the 12th minute as Mbappe latched on to an exquisite pass from Draxler - amid suspicions of offside - and steered an assured finish into the bottom left corner.

The prevailing sense was of the game soon becoming plain sailing for the hosts but veteran Italy midfielder Motta was dismissed after referee Sebastien Desiage decided he had trampled on Thomas with intent.

Emery's subsequent reshuffle saw Mbappe deployed alongside Cavani in a central attacking role, a call that was rewarded in the 25th minute.

Thiago Silva's raking ball found left-back Layvin Kurzawa raiding into the area and his cutback was dispatched by Mbappe.

Germany international Kevin Trapp was making just his third league start of the campaign in PSG's goal and he got down well to push Flavien Tait's drive away from the right corner.

Mbappe headed too close to Butelle in pursuit of his hat-trick to bring the first half to a close.

The 19-year-old glanced wide at the near post form 55th-minute Di Maria centre amid a pleasingly open start to the second half.

Emery withdrew Cavani in favour of midfielder Adrien Rabiot before the hour - his first genuine concession to PSG's numerical disadvantage.

Draxler pulled Angers apart once more in the 63rd minute, releasing Kurzawa to tee up Marco Verratti. Mbappe inadvertently blocked his team-mates' goal-bound shot and, because he did so in an offside position, Di Maria's follow-up did not count.

The visitors rewarded Butelle's efforts by constructing a slick 75th-minute counter-attack that concluded with Toko Ekambi prodding Tait's pass beyond Trapp for a 15th Ligue 1 goal this season.

Mbappe rattled the crossbar in his latest attempt to claim the match ball and a suddenly anxious PSG would have to endure Toko Ekambi dragging across the face of goal when an equaliser beckoned.