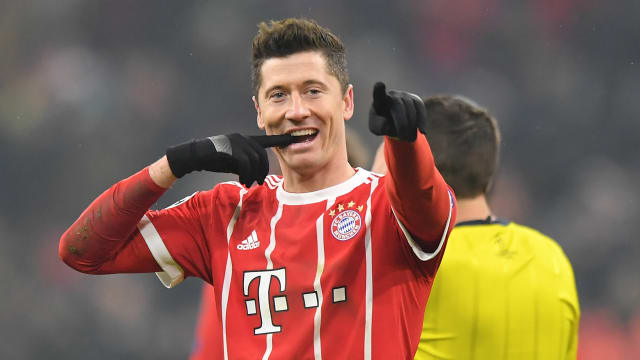 Lewandowski eclipsed former Brazil forward Elber as the most prolific foreigner in Bayern's history by notching a hat-trick in the 6-0 crushing of Hamburg on Saturday.

The treble elevated his tally to 142 competitive goals for the Bavarian club, surpassing Elber's previous record of 139.

But rumours of an off-season exit were fuelled by Lewandowski's hiring of Pini Zahavi as his agent in February.

Cristiano Ronaldo has reportedly given Madrid his blessing to pursue the Poland international as a successor to Karim Benzema.

"This shows that Cristiano Ronaldo is not stupid. Everyone wants to have such a player in their team," Elber told Abendzeitung Munich.

"If they have the opportunity to get Lewandowski away from Bayern they will do their best to do it. But Bayern is warned and Lewandowski feels very [happy] with his family here in Munich.

"He knows he has everything at Bayern. I hope and expect that he stays with us for a long time."

A good day for @lewy_officialpic.twitter.com/LFlpdmoRNv

Lewandowski, who joined Bayern in 2014, is on track to record 30 league goals for the third successive season.

Elber rates the 29-year-old as the "the whole package" and a clear level above every other striker in the world.

"He has everything. It is difficult to say what weakness he has and what he still needs to improve," the former Stuttgart and Lyon player said.

"You could say that it is easy to score goals at Bayern, because the other teams are not good enough. But you have to [deliver].

"He does that, and also in the Champions League. He is currently the best centre-forward in the world."