Dimitrov sent packing by Verdasco before rain sets in 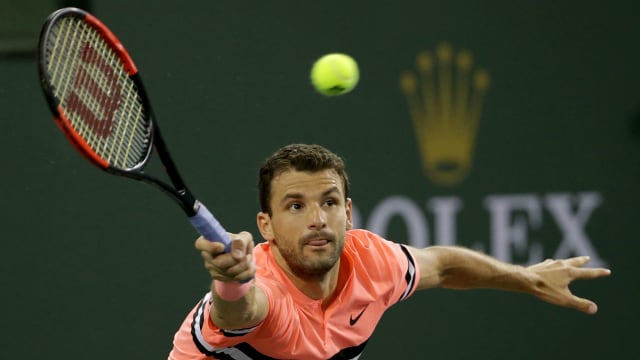 Grigor Dimitrov surprisingly farewelled the Indian Wells Masters, but Dominic Thiem and Kevin Anderson were among the seeds to advance.

Dimitrov - the third seed - was the biggest casualty on Saturday after he was stunned by Spanish veteran Fernando Verdasco.

Thiem and Anderson, however, had no such trouble booking their spots in the third round, along with Tomas Berdych.

World number one and defending champion Roger Federer, meanwhile, was unable to complete his opening match due to rain.

Federer - a 20-time grand slam champion - won the opening set 6-3 and was level with Federico Delbonis 2-2 in the second before rain halted play for the day.

"Being able to go out to the court and know that you are ready to fight these guys, no? Now I'm 34 and I have to fight against players 21, 22, 23 that are much younger. They have much less miles or kilometres in his legs. And I just have to work really hard and keep that motivation high to be able to win matches."

The world number six and fifth seed continues to impress this season.

The Austrian star, who lost in the last 16 at the Australian Open, has now advanced to at least the quarter-finals of four of his five tour-level tournaments in 2018.

.@ThiemDomi is sizzling on this Saturday morning

That backhand is well and truly warmed up...

The Czech 12th seed was a class above against Maximilian Marterer, cruising to a 6-1 6-4 victory in just 71 minutes.

Tomas Berdych was the first player through to the third round as he progressed in his opening match at Indian Wells for the eighth time in his past nine appearances.

He is sure to face a tougher task against Australian Open semi-finalist and South Korean star Hyeon Chung, who rallied past Dusan Lajovic 6-7 (9-11) 6-3 6-3.

Pablo Carreno Busta, Roberto Bautista Agut and Adriano Mannarino were among the other seeds to move on, while Fabio Fognini and Albert-Ramos Vinolas joined Dimitrov in exiting the tournament.