All eyes on Tiger Woods in Valspar Championship final round 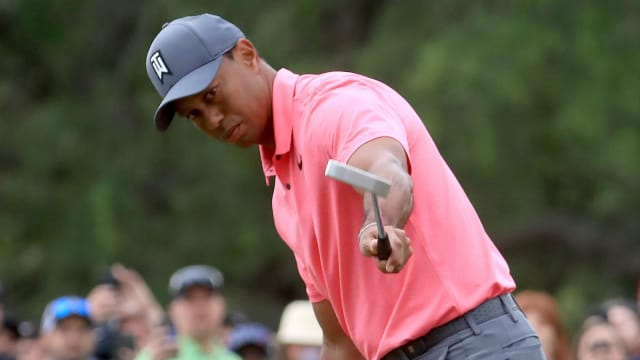 All eyes were on Tiger Woods at the Valspar Championship as the 14-time major champion began his final round one shot off the lead and in contention for a stunning, drought-breaking win.

Plagued by back injuries in recent years, Woods has not won on the PGA Tour since 2013, his fitness issues having prompted significant doubt over whether he would ever challenge for honours at the highest level again.

On Sunday at Palm Harbor, Woods had the opportunity to answer his doubters in style, by claiming his 80th PGA Tour title in only his fourth start of 2018.

The 42-year-old, sporting his familiar final-day attire of a red polo shirt and black trousers, started the day tied for second with Justin Rose and Brandt Snedeker at eight under, a stroke behind unheralded rookie Corey Conners.

Woods was due out alongside Snedeker in the penultimate pairing at 1:50pm local time in Florida.

The former world number one was likely to be high on confidence after carding his best round of the week to date on Saturday, all aspects of his game appearing in good shape as he signed for a 67.

Woods has been in the lead or within one shot on 69 previous occasions after 54 holes of a PGA Tour event, going on to win 62 of those tournaments.