Tolisso in a lot of pain - Bayern boss Heynckes 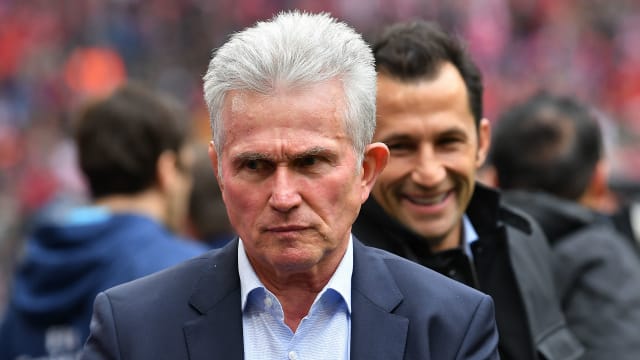 Bayern Munich midfielder Corentin Tolisso left the field "in a lot of pain" as his side beat Hamburg 6-0, according to coach Jupp Heynckes.

The 23-year-old was introduced as a second-half substitute during Bayern's rout of their relegation-threatened visitors before he was involved in a collision with Hamburg's Vasilije Janjicic.

Both players suffered shin injuries but Tolisso's were serious enough that he had to be assisted off the field by medical staff, and Heynckes said he was waiting on an update on the France international's condition from club doctor, Hans-Wilhelm Muller-Wohlfahrt.

"Coco [Tolisso] was in a lot of pain and is on his way to see Dr. Muller-Wohlfahrt. He will have a check-up there and then we'll know more."

Update on @CorentinTolisso?#Heynckes: "Both players clashed shins. Coco was in a lot of pain and is on his way to see Dr. Müller-Wohlfahrt. He will have a check-up there and then we'll know more." #FCBHSVpic.twitter.com/bOIJT6ke7Y

An early goal from Franck Ribery and two for Robert Lewandowski gave Bayern a 3-0 half-time lead, before Arjen Robben got on the scoresheet in the second half.

Ribery and Lewandowski scored a goal each in the last 10 minutes to complete an emphatic win and Heynckes praised his players' high-octane start to the match.

"We started the game very well and scored three goals very early on," he said. "That was a commanding victory.

"Before the break, we were a bit distracted, but we were leading 3-0 after 20 minutes, so we did very well.

"Overall, we played a very controlled match, even though our opponents were struggling."

Bayern travel to Turkey on Wednesday for the second leg of their Champions League last-16 tie against Besiktas, with a 5-0 aggregate lead from the first leg in their favour.

"This result is important for Wednesday," said Heynckes. "Because in football, we must never relax."