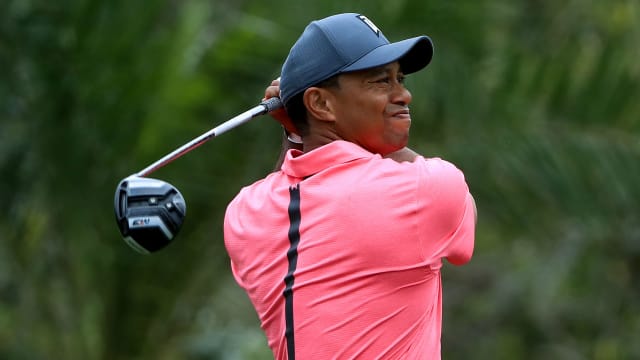 Tiger Woods reclaimed a share of the lead midway through round three at the Valspar Championship, courtesy of a superb chip-in at the ninth hole.

Unheralded rookie Corey Conners, who only gained entry to this week's tournament as a reserve, led by two overnight on six under, with 14-time major-winner Woods one of five players tied for second.

Yet all eyes were on Woods, who had led for part of the second round, as the leaders teed off on Saturday, with the 42-year-old - seemingly fitter than he has been in years after multiple back surgeries - seeking a first tournament win since 2013.

The former world number one duly turned in 33 to share the lead with Conners and Brandt Snedeker at seven under, birdies at the third and fifth for Woods followed by an unlikely gain on the ninth, where he missed the fairway and green before chipping in for a three.

Conners initially pulled clear at nine under by birdieing three of his first four holes, but the underdog then bogeyed the sixth and seventh.

After Woods' chip-in, Snedeker matched his playing partner's birdie to make it a three-way tie at the top.

Justin Rose, who sensationally holed his approach to eagle the 11th, Paul Casey and Sam Burns were one off the pace, with Branden Grace and Patrick Reed among those one further back.