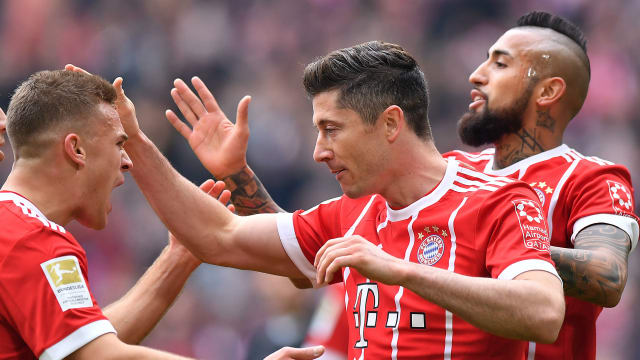 Robert Lewandowski became Bayern Munich's highest-scoring foreign player and brought up 100 Bundesliga goals with a hat-trick in a 6-0 rout of relegation-threatened Hamburg.

The 29-year-old Poland international struck twice in the first 20 minutes of a game that had the feel of an exhibition match at Allianz Arena, to break the record previously held by Brazilian striker Giovane Elber.

Lewandowski missed a late penalty, but was gifted a second spot-kick and scored to take his tally to 142 goals in 182 games across all competitions for Bayern.

Franck Ribery also grabbed a brace and Arjen Robben was on target to ensure Jupp Heynckes' side took another step towards their sixth consecutive Bundesliga title.

Heynckes restored Ribery, Robben and Lewandowski to his starting line-up for the game and saw his faith in Bayern's senior professionals repaid with a clinical display of finishing, but suffered a blow when substitute Corentin Tolisso had to be carried off with a serious leg injury.

The victory puts Bayern 20 points clear with 24 left to play for and the champions could have the title wrapped up before the end of March.

The opening goal felt inevitable from the outset and arrived after eight minutes when Lewandowski's pass to Robben was intercepted but the loose ball ran through to Ribery, who skipped over the outstretched arms of Christian Mathenia and rolled the ball into the unguarded net.

It was 2-0 four minutes later when Joshua Kimmich hung the ball up in front of the Hamburg goal and Lewandowski shook off his marker before sending a simple downwards header into the net from close range.

Bayern's third came after 19 minutes when Jerome Boateng's long ball was squared into the box exquisitely by David Alaba and Lewandowski side-footed the ball past Mathenia before the Hamburg goalkeeper could react.

The second half was 10 minutes old when Robben scored his first league goal of 2018 to make it 4-0, slamming the ball into the top-left corner of the net from just inside the box after good work by Alaba.

Bayern's day was spoiled when second-half substitute Tolisso collided with Hamburg's Vasilije Janjicic and suffered an injury to his shin that left him unable to continue.

Heynckes sent on Sebastian Rudy in his place and the Germany international soon announced himself with a curling shot from the corner of the penalty area that flew only a yard wide of Mathenia's goal.

With 10 minutes left to play, Ribery made it 5-0 with a superb solo effort, jinking his way through a crowd of players before beating Mathenia in a one-on-one - the pick of the afternoon's goals.

There was still time for Thiago Alcantara to win a penalty when Kyriakos Papadopoulos pushed him in the penalty area, but Lewandowski ballooned the spot-kick into the stands.

Lewandowski made no mistake on his second attempt, burying the ball into the right-hand side of the net to complete his treble.