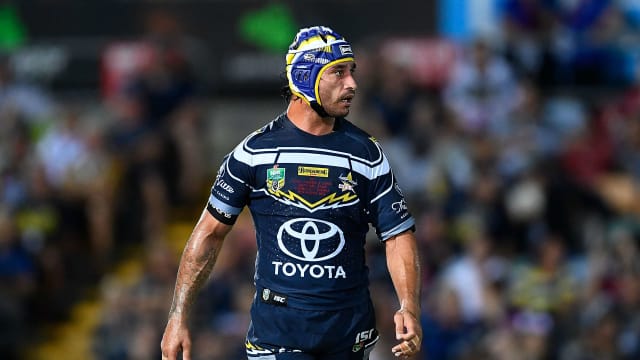 North Queensland Cowboys' Johnathan Thurston made his 300th NRL appearance and began his final season with a win, while Mitchell Pearce kicked Newcastle Knights to victory on his debut.

Veteran Thurston has confirmed that this will be his final NRL campaign, but he started his long goodbye in style on Friday, taking the Cowboys' appearance record outright as they beat Cronulla Sharks 20-14.

Thurston teed up Justin O'Neill for the opening try, before Coen Hess added a second and, after Josh Dugan hit back, North Queensland scored a third before half-time through Kyle Feldt.

Although Thurston then added a penalty following the restart, the Sharks set up a nervy finish when Ricky Leutele led a counter for James Segeyaro to go over, cutting the hosts' lead to two points.

But the day would only belong to one man and Thurston kicked Gavin Cooper through for a decisive score two minutes from time.

Pearce, signed following his release from the Sydney Roosters, earned the Knights their first golden point triumph in almost 10 years after a hard-fought clash with the Manly Sea Eagles in New South Wales.

The two sides traded six tries in a scrappy match, with Kalyn Ponga, Slade Griffin and Lachlan Fitzgibbon going over for the Knights, while Jorge Taufua, Shaun Lane and Brian Kelly scored for the visitors.

Daly Cherry-Evans then made amends for an earlier missed conversion with a late penalty goal to make it 18-18 and take the teams to an additional period, where the Knights had last triumphed on March 22, 2008, against the same opponents.

The home fans thought Pearce had won it in the first period of additional time as he shot just wide, but he made no mistake with just over a minute and a half remaining to seal victory.

"That couldn't have gone more to script," the 28-year-old told Fox.