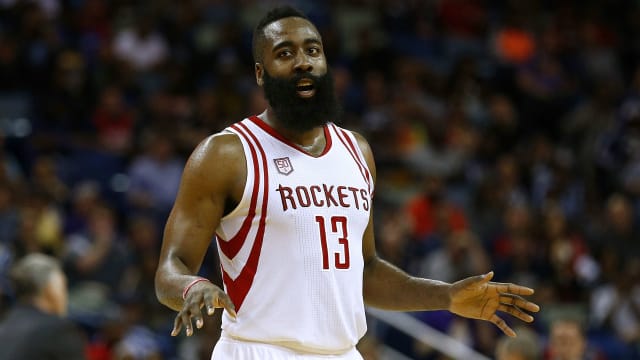 The Houston Rockets stayed red hot as they extended their winning streak in the NBA, while reigning champions the Golden State Warriors saw off the Brooklyn Nets.

Houston won their 16th successive game with a 122-112 victory against the Oklahoma City Thunder on Tuesday.

Chris Paul had 25 points and five assists, while James Harden had 23 points and 11 dishes.

The Rockets scored a combined 245 points in the last two games against the Boston Celtics and the Thunder, who are second and eighth in the league in points allowed per game.

"We try to dissect every team that we go against," Eric Gordon, who had 14 points off the bench, told the Houston Chronicle. "It's been fun."

The Warriors were too good for the Nets, recording a 114-101 win on home court.

Golden State came out on top thanks to their starters, who all finished with double-digit points in the Bay Area.

Stephen Curry top-scored with 34 points, Kevin Durant had 19, Klay Thompson posted 18, Draymond Green put up 16 of his own, while JaVale McGee added 12, with no bench player scoring more than six points.

The Washington Wizards trumped the Miami Heat 117-113 in overtime, but Dwyane Wade continued his resurgence.

The 36-year-old Heat favourite had 22 points including six in the fourth quarter and even had the chance to tie the game with five seconds to go.

His shot at the basket came up short, but to have him on the court at the end of the game shows the confidence coach Erik Spoelstra has in the veteran.

"I'll go to my grave with Wade shooting with the game on the line," he told reporters after game.

While Wade came up short, he is averaging 14 points per game in 10 appearances with the Heat and has scored 20 points in three of his last five games.

Damian Lillard had 37 points with two rebounds and two steals, while also going eight-for-11 shooting from beyond the arc, in the Portland Trail Blazers' 111-87 win over the New York Knicks.

Denver Nuggets center Nikola Jokic has been doing so much good as of late, but he was so bad in Tuesday's 118-107 loss to the Dallas Mavericks he was benched in the fourth quarter. Jokic finished two-of-nine shooting with four points.

Philadelphia 76ers rookie Ben Simmons was nearly perfect, going eight-for-nine from the floor with 16 points, 13 assists and eight rebounds in a 128-114 win over the Charlotte Hornets.

The Cleveland Cavaliers will be looking to avenge Saturday's loss to the Nuggets, but in the mile-high city they will have their hands full. Denver are also coming off a disappointing loss to the Mavericks, so they will have a fire lit under them for this matchup.