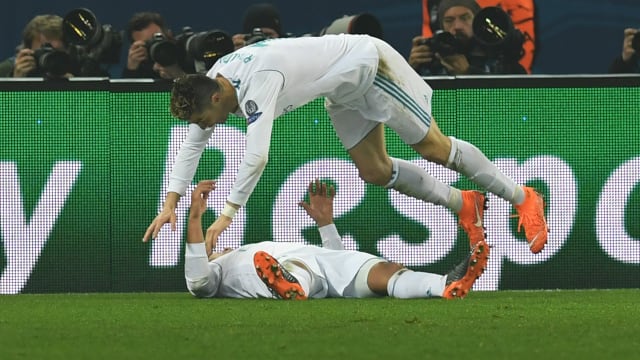 Real Madrid secured their place in the Champions League quarter-finals as a 2-1 win over Paris Saint-Germain on Tuesday gave them a 5-2 aggregate victory.

Cristiano Ronaldo's second-half header and a deflected strike from Casemiro were enough to keep the holders on track for a third trophy in a row, either side of a goal from Edinson Cavani.

PSG's frustrations were compounded when Marco Verratti was sent off after picking up a second yellow card for dissent.

Madrid seized the advantage in the tie with two late goals in their 3-1 first-leg win and they managed the clash at Parc des Princes in professional fashion, as PSG, without the injured Neymar, struggled for inspiration in the attacking third.

Zinedine Zidane somewhat surprisingly started Marco Asensio and Lucas Vazquez on the wings and the two combined to set up Ronaldo for the killer goal in the second half, as the Portugal star kept up his run of scoring in every game in this season's competition.

Verratti's dismissal ended any lingering hope of a comeback for PSG, with Casemiro sealing the win after Cavani's equaliser, meaning their wait for a European crown goes on and the pressure on head coach Unai Emery will grow after a second consecutive last-16 exit.

3 - 3 of Paris' last four red cards in the Champions League have been received by Marco Verratti. Nervous. pic.twitter.com/XCCRvA13v7

There was a scrappy start to the match, which began after a minute's applause in memory of former Fiorentina captain Davide Astori, with Sergio Ramos seeing the first half-chance well saved by Alphonse Areola following a corner.

Madrid began to look a threat every time they broke forward, with PSG lacking any real attacking quality in a nervy first half, and Areola had to race off his line smartly to save at the feet of Karim Benzema, making his 100th appearance in the competition.

That close call seemed to spur PSG into life and Keylor Navas had to be alert to deny Angel Di Maria and Kylian Mbappe, as Zidane made his frustration with Madrid's defending very clear on the touchline.

PSG turned up the pressure early in the second half, as fans lit flares in vast numbers in a bid to breathe life into the team, but Ronaldo doused any hope of a comeback 51 minutes in.

Asensio raced down the left wing, turned infield and slipped a brilliant throughball to Vazquez, whose clipped cross was headed down and into the net by Ronaldo at the far post.

8 - Cristiano Ronaldo has scored in all eight of his Champions League games this season, netting 12 goals. Ridiculous. pic.twitter.com/UnoTWpKEwT

Verratti's foolish remonstrations with referee Felix Brych earned him a second yellow card 15 minutes later, but Cavani at least gave the boisterous PSG fans something to cheer when Di Maria's diving header rebounded off Ramos and then the Uruguay striker before nestling into the net.

Benzema and Ronaldo each came close as space began to open up in the home side's defence, but it was Casemiro who brought an end to PSG's 100 per cent winning record at home this season, intercepting Adrien Rabiot's poor clearance before seeing his shot deflect over Areola and in with 10 minutes remaining.