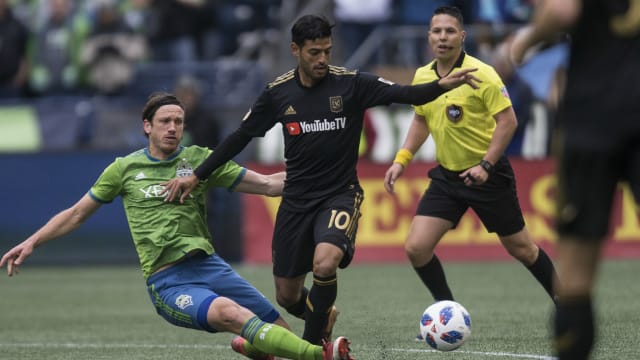 Los Angeles FC made a statement in their MLS debut as they upstaged the Seattle Sounders, while New York City also won the road.

It was a landmark occasion for the MLS' newest team LAFC on Sunday - the expansion franchise marking their inaugural game with a 1-0 victory at CenturyLink Field.

There is plenty of big names associated with LAFC, who are co-owned by NBA Hall of Famer and Los Angeles Lakers great Magic Johnson.

Hollywood star Will Ferrell is also part of the ownership team and he was in attendance as LAFC left Seattle with all three points thanks to Diego Rossi's early strike.

Look who stopped by the @espn booth...#SEAvLAFChttps://t.co/rq9Z821qag

Led by former United States and Swansea City boss Bob Bradley and headlined by Mexican star Carlos Vela following his arrival from LaLiga outfit Real Sociedad, it was Uruguayan Rossi who netted the winner in the 11th minute.

After hitting the post, Rossi was played in by Vela before finishing past Sounders goalkeeper Stefan Frei.

Will Bruin thought he had equalised for Seattle in the 65th minute but his goal was ruled out for offside, while substitute Handwalla Bwana hit the crossbar before Tony Alfaro was sent off late.

Not to be overshadowed by their newest city rivals, LA Galaxy saw off Portland Timbers 2-1 at Stubhub Center.

Two goals in as many first-half minutes from Ola Kamara and Romain Alessandrini set the tone in Carson, where Portland's Sebastian Blanco reduced the deficit with 24 minutes remaining.

New York flexed their muscles with an impressive 2-0 win at Sporting Kansas City.

Captain David Villa set up Maximiliano Moralez for the opener just past the half-hour mark before debutant Jesus Medina doubled the lead eight minutes into the second half.

New York ended the match with 10 men following a red card to Maxime Chanot, who denied an obvious goal scoring opportunity after a video review.