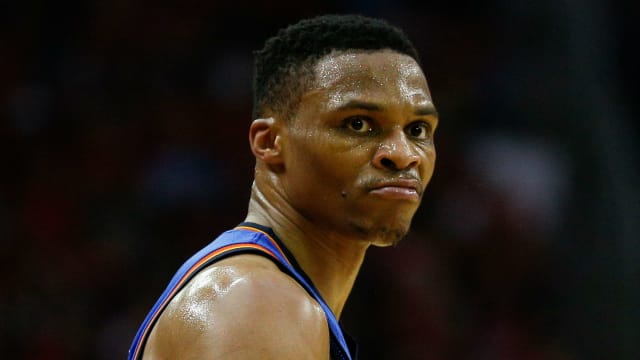 MVP Russell Westbrook scored 43 points while adding 14 rebounds and eight assists in Oklahoma City's 122-116 win over the Phoenix Suns, while the Warriors overcame a second half without Stephen Curry to take down the Atlanta Hawks 114-109.

It took a clutch three-pointer in the final minute in addition to two big offensive rebounds from Westbrook to lock up the Thunder victory.

"Crunch time is the most important part of the game man, the last five minutes," Westbrook told Fox Sports after the game. "I just try to stay in attack mode and keep making plays."

It took all the plays the Thunder could get as Devin Booker had 39 points, eight rebounds and six assists himself for the Suns.

Meanwhile, the Warriors watched Curry go out with an ankle injury in the second half, but thanks to a late dunk from Kevin Durant they were able to come away with a win.

Curry finished with 28 points despite playing just 24 minutes. His injury is not thought to be serious.

Orlando Magic forward Aaron Gordon had 27 points and 13 assists while team-mate Nikola Vucevic posted 22 points, 12 rebounds and six assists in a 115-106 overtime-win against the Detroit Pistons.

Charlotte Hornets guard Michael Carter-Williams played 14 minutes, but he may as well have played none as he went 0 for six from the floor with just two points and two pivotal missed free throws in a 110-99 loss to former team the Philadelphia 76ers.

MILES STARS FROM BEYOND THE ARC

Raptors forward CJ Miles could not miss from three-point range as he hit six treys in Toronto's 102-95 win over the Washington Wizards.

Fading in the corner...CJ Miles is on fire!

The last time these two teams faced off, the Boston Celtics rallied from a huge deficit and James Harden was called for back-to-back controversial offensive fouls in the final seconds. The Houston Rockets will want some revenge and will be looking to extend their winning streak to 15 games.