Crusaders too good for Stormers, Maddocks hat-trick in Rebels history 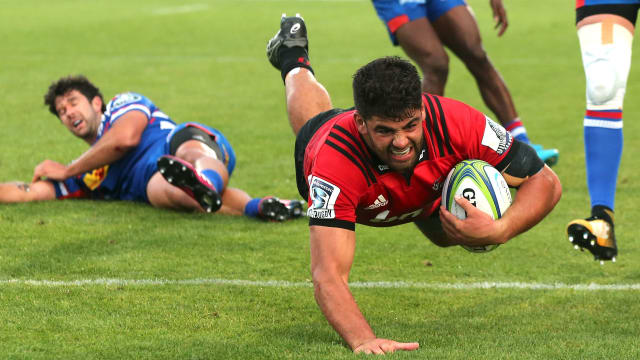 The Crusaders put the Stormers to the sword in a seven-try 45-28 beating, while Jack Maddocks' hat-trick helped the Rebels to a slice of history on Saturday.

Super Rugby champions Crusaders started their campaign with a 45-23 win over the Chiefs last weekend, and were in free-flowing form once again in Christchurch.

JC Janse van Rensburg put Stormers on the board, but Bridge had a second before the half-time whistle when he latched onto a grubber kick, as Crusaders led 31-7 at the break.

Stormers needed a fast reply and had just that with Wilco Louw dotting down after a quick break from Seabelo Senatla, and JD Schickerling scoring after more relentless pressure.

But Crusaders rallied again, a rolling maul eventually seeing the ball pop to Seta Tamanivalu, while Richie Mo'unga side-stepped three defenders for a brilliant try that further extended the score.

Steven Kitshoff had the last say for Stormers, but they have now lost seven straight Super Rugby matches to the New Zealand side.

It's been a massive game tonight which we've taken out 45-28 over the @dhlstormers. Thanks to the awesome fans for supporting us again tonight! #CRUvSTO#wewill#crusadeonpic.twitter.com/RlhGVXot4G

Elsewhere, Rebels won their opening two Super Rugby fixtures for the first time in their eight-year history, with a 37-17 defeat of Japanese side Sunwolves.

Maddocks was the hero as he became the first Rebel to score a Super Rugby hat-trick, with a 27-point second-half romp doing the damage to help captain Adam Coleman celebrate his 50th appearance in the competition with a win.