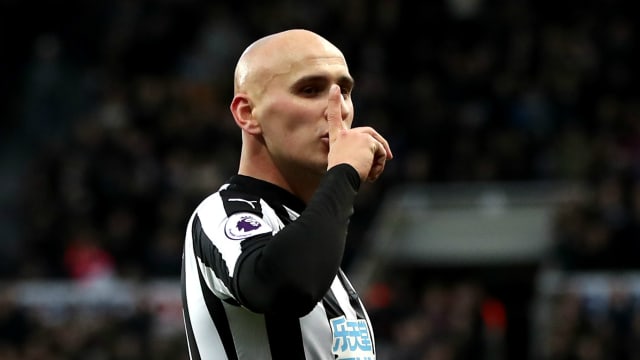 The former Reds midfielder misses his return to Anfield with a knee injury, with Benitez waiting on scan results to see the severity of the problem.

Shelvey has played 21 Premier League games this season and his absence will be a blow for Newcastle, who are two points above the relegation zone.

Islam Slimani, yet to make his Newcastle debut after joining from Leicester City on loan in January, is also a doubt.

"Jonjo Shelvey has a knock to his knee and he will not be available," Benitez told reporters on Friday.

"We are waiting on the results of the scans. We don't know how serious it is. He wants to train and play but we have to check.

"Islam Slimani will continue to work with the physios and fitness coach in the gym. Dwight Gayle is the other one but he is fine. [Matt] Ritchie is fine and the others are okay."

Rafael Benítez was manager of @LFC when this happened in 2007... #UCLpic.twitter.com/K4UPO4E6K1

Benitez is a Liverpool legend after leading the club to the 2005 Champions League title and the final two years later.

"[My staff and I] won so many things there. Six years, four trophies. We enjoyed every minute. Their fans, our fans - they are very similar. The connection is there.

"The main thing for me is to try to win. I wish Liverpool all the best, but after this game. We have to do our best.

"Liverpool have the pace to play counter-attack. They are really good. When they have the ball, the pace, the ability, it is so difficult and we have to take confidence from our win against Manchester United into the game.

"It's not just [Mohamed] Salah. [Roberto] Firmino, [Sadio] Mane, anyone can be a threat. They have pace, energy. Not just him. We have to try to control everyone with concentration and intensity."

This is the wintry scene at the Newcastle United Training Centre this morning, where the players will be put through their paces. #NUFCpic.twitter.com/qbSU4bDw6h

Snow has disrupted Newcastle's preparations for Benitez's return to Anfield, but the Spaniard shrugged off the impact the weather has had.

"[The weather] was fine," Benitez said. "We have the indoor [facilities] and the players are training well. Yesterday, we were working very hard. Today, we will train on the grass.

"We try to maximise the time we have. We have analysed videos and done some work indoors. The synthetic pitches are much better but they are different to normal grass.

"We have been working on our game plan, on playing with the same intensity. We will fly to Liverpool. We are checking the weather and hopefully we can do it today."