Alvarez vows to be more aggressive in GGG rematch 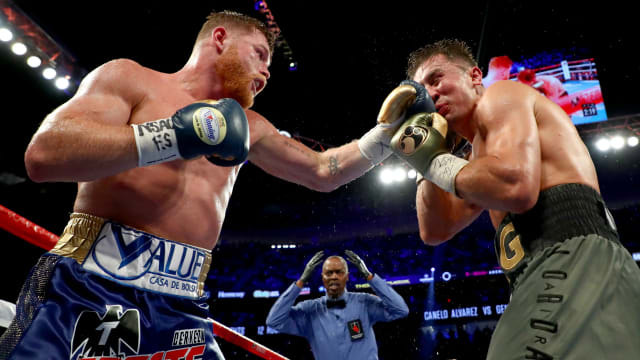 Saul 'Canelo' Alvarez plans to be more aggressive when he faces Gennady Golovkin in their eagerly awaited Las Vegas rematch.

The Mexican will face off against his rival on May 5 at the T-Mobile Arena with the duo both aiming to settle a score after their first middleweight title bout ended in a contentious draw at the same venue last September.

On that occasion, Alvarez felt he had defeated the fearsome Kazakh, who holds the WBA, WBC, IBF and IBO belts.

Alvarez does not believe he needs to fight too differently to how he did in the first bout, claiming GGG rarely hurt him, but he is planning to fight with added aggression.

Speaking courtesy of Golden Boy Promotions and GGG Promotions, he said: "I'm at 30 to 40 per cent.

"I'm training every day but still have not started the real and intense preparation for the fight.

"After all this previous shows with interviews and all, I will concentrate for two months and start the real preparation.

.@Canelo and @GGGBoxing face off for the first time since Sept 17. Ready to settle the score on May 5 @TMobileArena#CincoDeMayo#CaneloGGG2

"I dont need to fight in a different way. It's all about adding some more skills such as condition or aggressiveness. I fought really well and just need to add some few more points, and it will work.

"I felt him troubled when I hit him low. I felt it and heard it. And then at the 10th I was close to knocking him out.

"I hurt him more than he did to me. He never hurt me, just hit me sometimes but never hurt me. I got him hurt more often.

"I will be more aggressive from the very first round. I want no doubts this time."