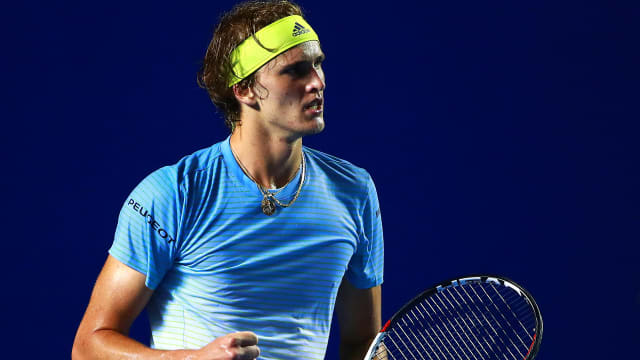 Alexander Zverev and Juan Martin del Potro eased into the Mexican Open second round, while Kei Nishikori made an early exit on Tuesday.

Zverev, the highest-ranked player in the draw after Rafael Nadal's withdrawal due to injury, was too good for Mackenzie McDonald 6-3 7-5.

The German served seven aces and progressed in 80 minutes despite only converting two of 10 break points.

Zverev will face countryman Peter Gojowczyk, who cruised past wildcard Lucas Gomez 6-3 6-2, in the next round.

Dominic Thiem, the 2016 champion, faced a stern test but the third seed eventually got past qualifier Cameron Norrie 6-3 5-7 7-5.

Thiem's draw has been made slightly easier after Nishikori was beaten by Denis Shapovalov.

The Canadian teenager recorded a 6-7 (3-7) 6-3 6-1 win over Nishikori, who marked his ATP World Tour return with a run to the New York Open semi-finals this month.

That was just one of several upsets as defending champion Sam Querrey and fourth seed Jack Sock exited.

Feliciano Lopez, who was due to face Nadal, made the most of an easier first-round clash, overcoming lucky loser Taro Daniel 4-6 6-3 6-4.

The Spaniard will next face Thanasi Kokkinakis after the Australian wildcard beat Alexander Bublik 6-4 6-3.