Golovkin trainer warns 'liar' Alvarez must not 'defraud the public' 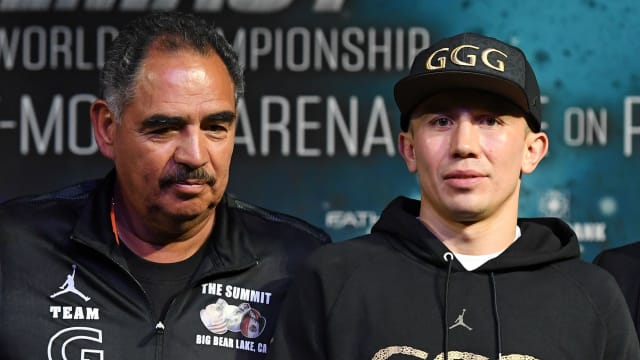 Golovkin and Alvarez will return to the T-Mobile Arena on May 5 with a score to settle after their first middleweight title fight at the same venue ended in a controversial draw.

Alvarez vowed to knock the undefeated WBA, WBC, IBF and IBO middleweight champion out before they stepped into the ring in September and the Mexican said there will be no need for the judges to decide the outcome second time around.

Abel Sanchez, Golovkin's trainer, accused Alvarez of spoiling the bout last year and warned his compatriot's reputation could be damaged beyond repair if he takes the same approach.

Sanchez told Omnisport: "Whichever way the decision went [in the first fight], it was disappointing to watch a guy that has fought all his fights in a moving forward manner - I am talking about Canelo.

"It was disappointing, as a Mexican, to see somebody run like that for 12 rounds and not give us the fight that he promised us before.

"He promised he was going to knock Golovkin out in 10 rounds and he ran for 12 rounds. It's impossible to knock someone out when you are not in position to knock them out.

The champions have arrived. #CaneloGGG2pic.twitter.com/y3GbM6CUzV

"He was throwing punches in desperation, just trying to get away, and those pitty-pat punches are not going to knock somebody of the calibre of Golovkin out.

"He got away with it, I think he fought the perfect fight not to be knocked out. He fought the perfect fight he needed to fight to be standing after 12 rounds, but you don't lie to the public beforehand and tell them you are going to fight this kind of fight and then expect the public to buy it and buy it again when you've been a liar from the get-go.

"He is the one that is opening his mouth and he needs to be a man of honour and a man of his word and do what he says he's going to do.

"If that happens, then we are going to have a heck of a fight because they are going to be standing in front of each other and being technical, being smart in doing the things necessary to hurt the other guy. Somebody is going out if they are standing at distance.

"If he runs again, then I see the same scenario. The onus is on Canelo, he is the one that is going to have to answer his critics."