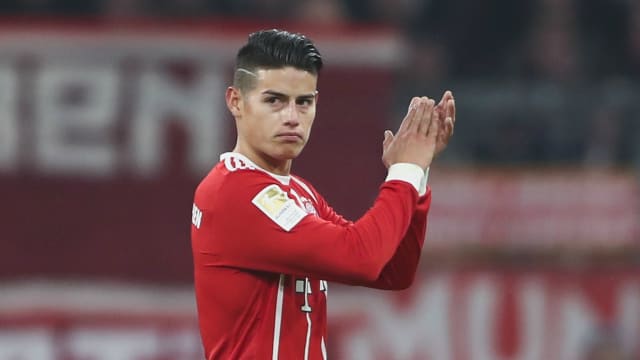 James Rodriguez's long-term future at Bayern Munich will not be decided in 2018, according to chief executive Karl-Heinz Rummenigge.

Reports have indicated James' parent club Real Madrid could seek to send the Colombia international to Bayern on a permanent deal at the end of the season as part of a transfer involving Robert Lewandowski.

Bayern have a EUR42million purchase option on James but the Bundesliga leaders are not in a hurry to secure the 26-year-old, while Lewandowski prompted speculation about his future this month by hiring Pini Zahavi as his new agent.

"It was Carlo Ancelotti's idea to sign [James] and I think that was a very good idea," Rummenigge told Bayern TV. "He has developed very well, particularly under Jupp Heynckes.

"He has become a very important player for us, technically strong with a wonderful shot and a great free-kick like we saw recently in Leverkusen. We're benefiting from his way of playing because he's evolved into a playmaker.

"He's on loan with Bayern for two years and then we have the option to buy him out of his contract for EUR42m, if I'm not mistaken. Of course, that's still a lot of money, even if we all saw some really crazy figures during the last transfer window.

"We will wait and see what happens and decide what to do. However, that won't happen in 2018 because we have plenty of time to decide and the purchasing option won't expire."

#Rummenigge : " @jamesdrodriguez is an important player for us. Technically strong with a wonderful shot!"

What do you think is James' best attribute?   #MiaSanMia pic.twitter.com/cKX0vSNFaC

Although Bayern are 19 points clear at the top of the Bundesliga, with 10 rounds of matches still to play, Rummenigge said nothing is being taken for granted in the club's hunt for a sixth straight league title.

"We'll only celebrate when it's mathematically certain. We can wait," said Bayern's CEO.

"It's not the first time and it's all to do with experience. And also, Jupp Heynckes won't tolerate any nonsense."