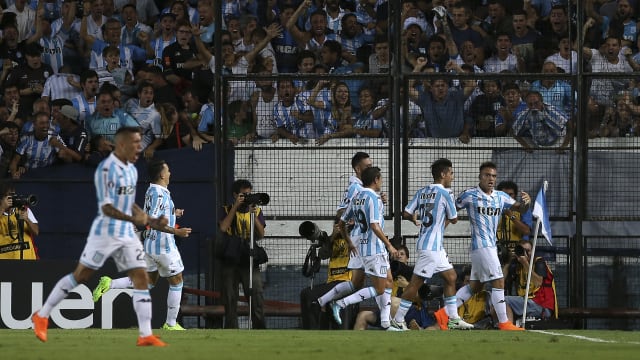 Lautaro Martinez led Racing Club past Cruzeiro in the Copa Libertadores, while Colo-Colo were beaten Tuesday.

Linked with a move to Inter, Martinez scored a hat-trick as Racing claimed a 4-2 win over Cruzeiro in Buenos Aires in their Group 5 clash.

The 20-year-old opened the scoring in the 14th minute, tucking away a set-piece from Neri Cardozo.

The visitors equalised on the half-hour mark thanks to a Giorgian De Arrascaeta header, but another set-piece helped Racing restore their lead as Martinez struck again.

Martinez scored from a third set-piece in the 63rd minute, heading in a Ricardo Centurion corner to make it 3-1.

Robinho pulled a goal back for Cruzeiro, but Augusto Solari sealed the hosts' win despite a late red card to Renzo Saravia on a day that marked the beginning of the Copa Libertadores group stage.

In Group 1, Cerro Porteno recorded a 2-0 victory over Monagas in Maturin.

Cristian Insaurralde opened the scoring with a spectacular left-footed volley from inside the area in the 27th minute.

Marcos Caceres doubled the lead and sealed Cerro Porteno's win with a second-half strike after a poor error from goalkeeper Alain Baroja, with Monagas later reduced to 10 men.

In the same group, Defensor Sporting and Gremio played out a 1-1 draw.