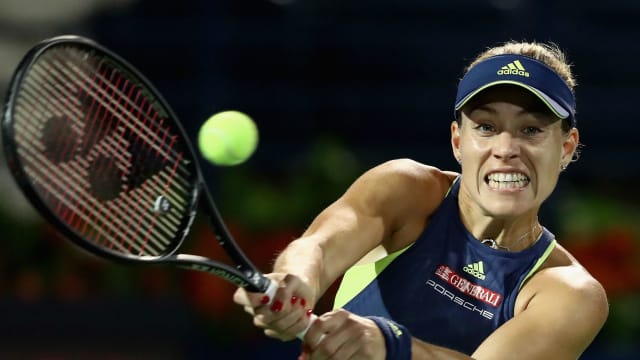 Angelique Kerber sauntered into the second round of the Dubai Tennis Championships with a straight-sets victory over Barbora Strycova on Tuesday.

Kerber has made an impressive start to 2018 and the two-time grand slam champion made short work of beating Strycova, a runner-up two years ago, 6-2 6-1.

The steely German failed to hold in the first game of the match, but that was as good as it got for Strycova, who was outclassed by the sixth seed.

Kerber broke three times in the opening set and twice in the second, easing to victory in just shy of an hour to set up an encounter with the 2016 champion Sara Errani - a straight-sets winner against Lesia Tsurenko.

"I think I played a good match. I played a solid match." said Kerber. "It's always tough to play against her. You never know what'll happen. She's always a fighter, but I'm happy to have won the match in two sets."

The fifth seed won the first three games of the match and broke twice in the second set to prevail, while Anett Kontaveit, Carla Suarez Navarro, CiCi Bellis and Wang Qiang also advanced.

Teenager Kuzmova is 85 places below Cirstea in the rankings, but reached round two with a 6-4 6-2 success.