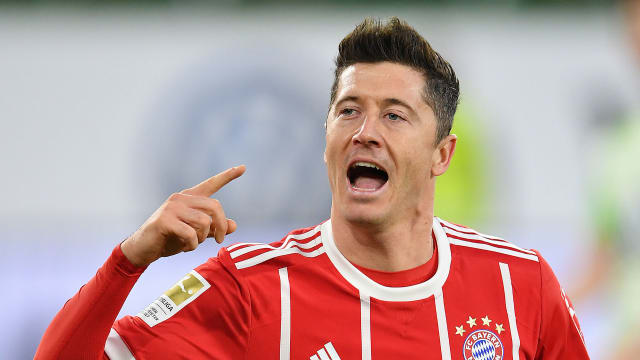 Robert Lewandowski plans to ignore speculation about a move to Real Madrid and continue helping Bayern Munich challenge for silverware.

Poland international Lewandowski will be out of contract at the Allianz Arena in 2021 and has been touted as a target for Madrid, who are said to be keen to boost their attacking options following a faltering LaLiga title defence.

The 29-year-old refuses to be distracted by such talk and insists his full focus will be on helping Bayern continue to enjoy success as they close in on a sixth successive Bundesliga title.

"At the moment I do not worry about it," Lewandowski told Kicker.

"If I was to think about the Real speculation as a Bayern player it would not be good for me because I wouldn't be focused on my job here anymore.

"I'm a Bayern player and I want to give everything here."

With 20 #Bundesliga goals already in the bag, it's time for #LewanGOALski to focus on #FCBBJK ? #packmas#UCLpic.twitter.com/6fFVFthVTt

Bayern hold a 19-point lead in the Bundesliga and face Besiktas in the last 16 of the Champions League, the first leg taking place at Allianz Arena on Tuesday.

Lewandowski would not consider it a surprise if the Bavarian giants took the continental title, but has concerns about the status of Germany's top flight, which has no other representatives in the knockout stages.

"We want to win everything," said the striker.

"It would not be a sensation if Bayern won the Champions League, but it could become more difficult in the future with what's going on in other leagues.

"The Bundesliga must be careful to keep its four spots. It would be good if along with Bayern and Dortmund, a third team would be constantly represented in the Champions League."

While Lewandowski is a proven goalscorer in the Bundesliga, he is yet to record figures worthy of comparison to prolific duo Cristiano Ronaldo and Lionel Messi.

It is not an issue for the Pole, though, who pointed out that he is a different type of player to the duo who have shared the last 10 Ballons d'Or.

He added: "Messi and Ronaldo have an advantage because they aren't classic number nines. For a central striker it is more difficult sometimes because you have your back towards goal.

"You have to keep the ball, see what is happening, turn around and then go forward. It is easier when you have the pitch in front of you."