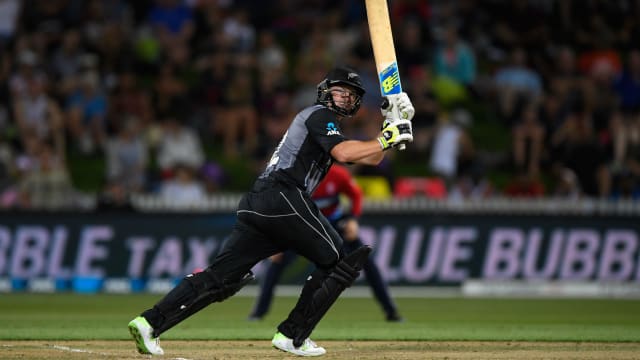 Colin Munro starred once again as New Zealand booked their place in the trans-Tasman Twenty20 tri-series final, despite a two-run defeat to England in Sunday's last group match.

After England had posted 194-7, thanks chiefly to an unbeaten 80 from fit-again skipper Eoin Morgan and Dawid Malan's 53, the Black Caps required 175 to finish ahead of their opponents on net run-rate and guarantee a place in the final.

Munro significantly enhanced the chances of that target being reached by clubbing 57 from just 21 deliveries on another small ground.

New Zealand's rate of progress slowed significantly following his departure, as spinners Liam Dawson and Adil Rashid impressed, but the previously becalmed Martin Guptill eventually picked up the pace to reach 62 off 47 balls and effectively end England's hopes of qualifying.

After moving past 175 at the start of the 19th over, the hosts fell narrowly short of winning the game as Chris Jordan and Tom Curran kept things tight at the death.

Yet it will be New Zealand who face Australia in Wednesday's final, with England's first win of the series coming too late and by too slim a margin to save them.

Big finish!
De Grandhomme can't find the fence needing 4 off the final ball and we come up 3 runs short of the 195 target.
But we are still through to the FINAL with a superior net run-rate  #TriSeriespic.twitter.com/HdiTAhN5Lf

Morgan and Malan put on 93 for the third wicket in an England innings otherwise punctuated by the fall of regular wickets.

There were five sixes for Malan - the initial aggressor - and one more for Morgan, who accelerated in devastating fashion, while Tim Southee was comfortably the pick of the home attack with 2-22 from four overs.

For his 80 not out, from just 46 balls, the player of the match is England's captain, @Eoin16! pic.twitter.com/t7ZFJwpAOw

Munro cleared the ropes on seven occasions and reached 50 from just 18 balls, the third time he has reached the landmark in that many deliveries or fewer.

Rashid and Dawson, who had 1-9 from three overs before his last set of six went for 18, brought England back into the game, but Guptill eventually found his feet to ensure qualification was a formality for the Black Caps.

An unbeaten 37 off 30 balls from Mark Chapman was not quite enough for New Zealand to win the match, but it mattered little.