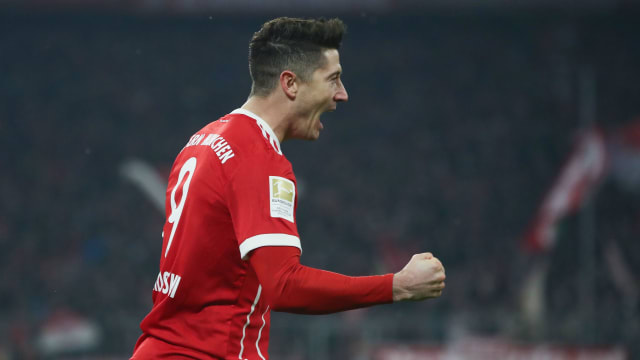 Robert Lewandowski came off the bench to extend Bayern Munich's winning run to 13 matches by scoring a last-gasp penalty to earn a 2-1 come-from-behind victory against Wolfsburg.

Bayern looked set to be heading for a draw at the Volkswagen Arena after Arjen Robben had seen an earlier penalty saved, but Gian-Luca Itter showed his inexperience with a tug on the Dutchman, handing the visitors another spot-kick, which Lewandowski tucked past Koen Casteels.

It was the Poland international's 16th goal in 15 Bundesliga matches against Wolfsburg, a record which includes 12 in his last six against the Wolves, and opened up a 21-point advantage over RB Leipzig - who take on Eintracht Frankfurt on Monday - at the summit.

Bayern have not suffered defeat since going down 2-1 to Borussia Monchengladbach on November 25 but they looked in danger of losing when Wolfsburg defended stoically after Daniel Didavi's opener.

That goal was missed by a section of the home supporters who did not take their seats until after 19 minutes and 45 seconds - a reference to the year of the club's founding - over poor results, and they were unable to cling on for an impressive draw despite Casteels saving a spot-kick from Robben in the 55th minute.

The former Netherlands international made up for his failure to convert, though, by setting up Sandro Wagner for Bayern's equaliser, and then prompting a foul from Itter which allowed Lewandowski to send Jupp Heynckes' men into Tuesday's Champions League tie with Besiktas in fine form.

Lewandowski has won it!

90th minute penalty. That's a nice round 20 for the season #WOBFCB 1-2 pic.twitter.com/aJ3MSGKmah