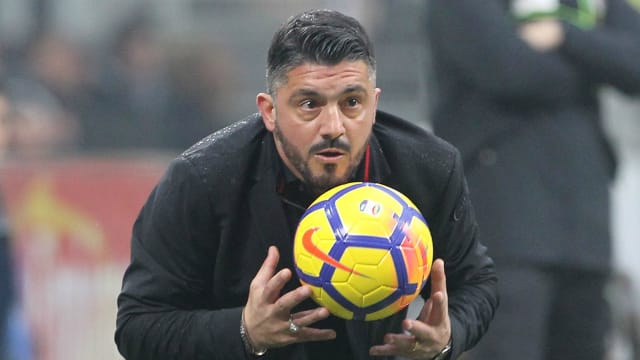 AC Milan boss Gennaro Gattuso believes finding a "beautiful girlfriend so he can rest and make love" could be the key to Patrick Cutrone maintaining his hot streak in front of goal.

With Nikola Kalinic out injured and Andre Silva struggling for form, the 20-year-old forward has stepped up to lead the line in recent weeks.

Cutrone has scored four goals in his last four outings in a Milan shirt, with his opener in the 3-0 win at Ludogorets in the Europa League on Thursday taking his tally for the season to 13 in all competitions.

Gattuso, however, wants to ease the level of expectation surrounding a player who has already drawn comparisons to Rossoneri great Filippo Inzaghi.

"We are taking it easy on Cutrone. He must not get distracted by the fact that he is the youngest player in Milan's history to score that many goals," he told the media.

"He has to work and to rest. I hope he finds a beautiful girlfriend so he can rest and make love."

#Gattuso: "I try to get something extra from my players. When I see a problem, I'm the first one to offer help. I don't talk a lot with them, I went into the dressing room a couple of times. I only talk to some players when I see they are having an issue"#MilanSampdoria

The in-form Cutrone looks likely to retain his place in Milan's side for Sunday's crucial Serie A clash with Sampdoria, who sit three points clear of their opponents in sixth place.

The game pits Gattuso up against opposite number Marco Giampaolo - someone he knows well after the pair took their coaching badges at the same time.

"I won't lie, I stole a lot of ideas from Giampaolo," the former Italy international admitted in his pre-match news conference.

"I know what a fine coach he is and am very worried, because this is a very difficult game in which we cannot make mistakes. If you make an error, Sampdoria will not let you get away with it.

"It's important we improve our performances and become more consistent. At times we're too predictable, we lose the ball when dribbling out of defence and don't develop our play."

Milan will be without Franck Kessie through suspension on Sunday, but Gattuso believes the hosts have adequate cover for the absent midfielder.

"Both [Riccardo] Montolivo and [Manuel] Locatelli are good alternatives to Kessie. Montolivo has plenty of experience and quality, while Locatelli gives us freshness and extra depth," he added.