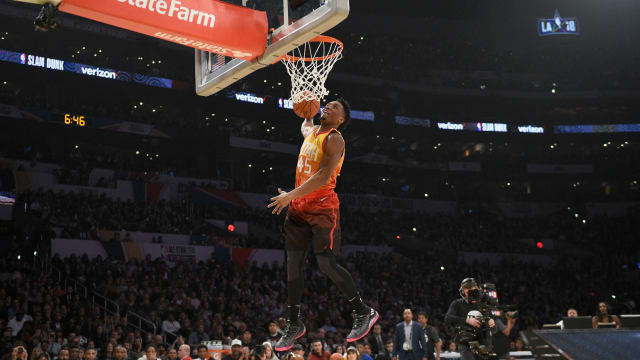 Saturday was the day most basketball fans wanted to see during the All-Star weekend.

The dunk contest, three-point contest and skills competition make up one of the most entertaining nights in all of sports and it did not disappoint at Staples Center.

It was a night of nostalgia and one of a preview as we saw Devin Booker send a message to the entire NBA.

BOOKER CAN SHOOT WITH ANYONE

Booker has quietly been one of the best scorers in the NBA in the last two years. The Phoenix Suns guard is averaging 24.2 points and 38.3 percent shooting this season, and he truly showed off his shooting by winning the three-point contest over Klay Thompson of the Golden State Warriors.

Devin Booker catches fire in the final round of the #JBL3PT competition to score an all-time record 28 PTS! pic.twitter.com/NsXjSCgpEd

We all know Mitchell can get up, but we might not have been sure he could get up like Vince Carter. He showed he absolutely could though and did so while wearing Carter's vintage Toronto Raptors jersey.

"Half man, half amazing!"

Is that Donovan Mitchell or Vince Carter?

Mitchell replicates the dunking legend and wins the #VerizonDunk Contest with this incredible hammer!#TakeNotepic.twitter.com/G4XxvLbgYl

It was possibly the best dunk of the night and wrapped up the contest quickly as he took down Cleveland Cavaliers recruit Larry Nance Jr. in the final.

DINWIDDIE HAD THE MOST IMPROBABLE WIN

Did you even know Spencer Dinwiddie was in the skills competition? You probably did not, but that did not stop him from bringing home the win.

The Brooklyn Nets guard took down Lauri Markkanen of the Chicago Bulls in the final to give the victory back to the little men as the previous two competitions had been won by seven-footers.