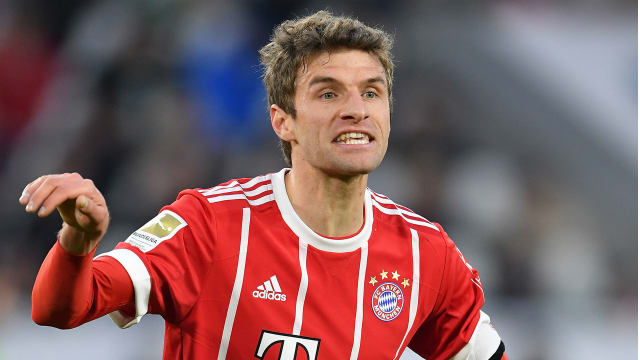 Daniel Didavi's early opener had put the hosts ahead and, although Sandro Wagner levelled midway through the second-half, Bayern had to wait until the 91st minute for a winner - Robert Lewandowski converting from the spot after Arjen Robben had already seen an earlier penalty saved.

Muller's introduction in the 62nd minute proved a big turning point in the contest, and Heynckes says the Germany forward was key to Bayern's triumph.

"With the substitution of Muller he has changed our game, because he is very flexible, goes into the room between the lines and also creates space for team-mates," Heynckes said.

"With the early goal, Wolfsburg were able to raise their game and be compact and defensive. We were struggling in the first half because we just did not combine well.

"We had possession, but never got deep in Wolfsburg's half. It was clear to me that we would not get chances like that.

"During the second half we played more fluently and faster, and we are happy. For Wolfsburg, that is very bitter, because they have fought exceedingly."

Wolfsburg boss Martin Schmidt, meanwhile, lamented the lack of a clinical edge to his side's display.

"We defended well over a long time. We lost the game today in attack, because we did not achieve much going forward," he told the club's official website.

"We gave the balls away too fast. We actually had a clear plan where the balls have to go. In the second half we had two or three good transfers, but the last pass was always too short.

"At some point the pressure became too great. So, it was just not enough to win."

While Wolfsburg will now switch focus to their clash with fellow strugglers Mainz, Heynckes and Bayern turn their attention to the Champions League round of 16 clash with Besiktas in midweek.