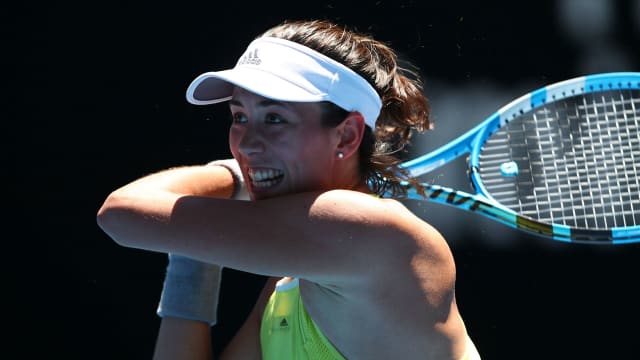 Garbine Muguruza made short work of Sorana Cirstea to reach the quarter-finals of the Qatar Open with a 6-0 6-4 triumph on Thursday.

The fourth seed needed just over an hour to advance against her Romanian opponent, who was staring down the barrel of a double-bagel defeat before getting off the mark in game nine.

Muguruza, once again teaming up with Conchita Martinez, who was in her box during last year's Wimbledon triumph, did not drop a point until serving at 40-0 in game two, and was up a double break at 3-0 thanks to a well-placed overhead backhand.

A skewed Cirstea backhand extended her lead to 5-0 and, after successfully serving out the opener, Muguruza broke at the first time of asking in the second set thanks to some excellent defensive work.

Cirstea finally put herself on the board, only to double fault on break point on her next service game, before Muguruza held to leave herself one game from victory.

A brief rally from Cirstea, which yielded three straight games, put the pressure on slightly, but an unforced error count of 43 ultimately proved costly as Muguruza served for the match at the second time of asking.

"I like to feel the pressure to be one of those privileged tennis players that competes for titles," said Muguruza.

"It's tough when you lose but I like it [the pressure]."