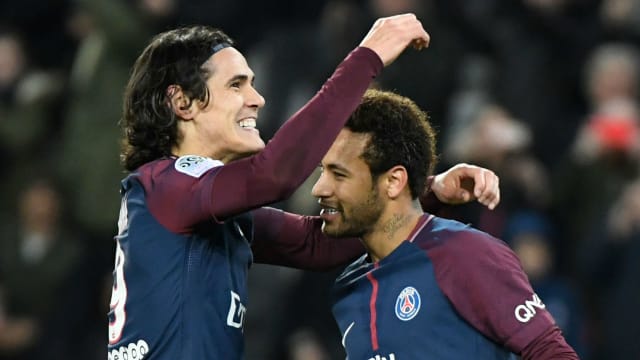 They might have given us a lovers' tiff or two on the pitch but, as a key Valentine's Day engagement arrives, Paris Saint-Germain forwards Neymar and Edinson Cavani have shown themselves to be the hottest couple in Europe.

Neymar and Cavani can spearhead PSG's bid to unseat Real Madrid at the Santiago Bernabeu on Wednesday knowing no two players in Europe's top five leagues this season have combined more often for goals than the seven their partnership has yielded.

Cavani surpassed PSG's all-time scoring record with the help of five Neymar assists, while also laying on a couple of goals for the Brazilian. Perhaps tellingly, no Madrid duo make the rundown.

The next most prolific pairings on the continent have produced six goals in tandem, including Lionel Messi and his Barcelona ally Jordi Alba and Liverpool stars Mohamed Salah and Roberto Firmino.

Indeed, there are no more equitable on-field companions than Salah and Firmino, who have assisted each other on three occasions apiece.

Unfortunately, some relationships are doomed to be all take, take, take. Chelsea striker Alvaro Morata and Sampdoria's Fabio Quagliarella have gobbled up six assists from Cesar Azpilicueta and Gaston Ramirez without returning the favour.

Manchester City's creator-in-chief Kevin De Bruyne is still hoping for some return mail from Sergio Aguero, who has benefited from the Belgian's ingenuity on five occasions, much like Luis Suarez on the end of five Sergi Roberto assists at Barca and Robert Lewandowski making the most of his established union with Thomas Muller at Bayern Munich.

Manchester United forward Anthony Martial has four goals from Paul Pogba assists, teeing up his fellow France international once. Their combination yields a goal every 183.2 minutes - the only goals-per-minute ratio more efficient than Neymar and Cavani's 192.1.

19 - Kevin De Bruyne now has 19 assists in all competitions for Manchester City in 2017-18; five more than any other Premier League player. Creator. pic.twitter.com/IhwrZQEN1k

7 - Jordi Alba has assisted Lionel Messi for seven goals this season in all competitions, more than any other Barcelona player. Magnet. pic.twitter.com/hwg3NHUtcv