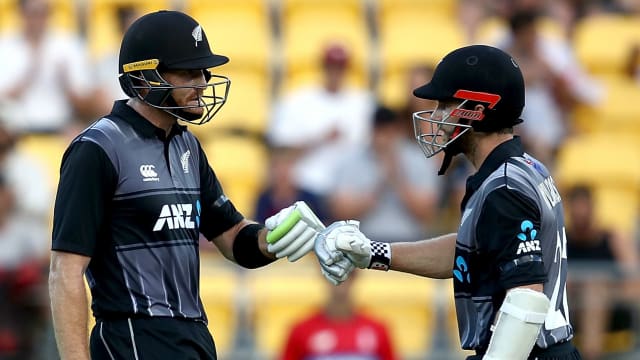 New Zealand recorded their first victory of the tri-nations Twenty20 international series on Tuesday as England lost by 12 runs in Wellington to remain winless.

Australia have already reached the decider in Auckland next week after beating first the Black Caps and then England twice in their opening three matches.

It was New Zealand's turn to get off the mark at Westpac Stadium, thanks largely to Martin Guptill (65) and Kane Williamson (72), who helped the hosts post 196-5 batting first.

Ish Sodhi, Mitchell Santer and Trent Boult then restricted England to 184-9, as Dawid Malan (59) and Alex Hales (47) lacked the support they needed to stage a meaningful run chase.

On the board in the Tri-Series! A 12 run win in Wellington. @englandcricket finish 184/9 after 20. Scoring | https://t.co/4SySr21ma1#NZvENGpic.twitter.com/ct3mDQVwqC

After winning the toss and choosing to field, England fatally failed to subdue New Zealand's dangermen.

Guptill survived the loss of Colin Munro (11) to form what proved to be a match-winning partnership of 82 with Williamson, whose place in the side had been questioned following a run of low scores.

The remaining opener tucked in to claim successive boundaries off Mark Wood (2-51) and then David Willey (0-36) in the second and third overs respectively.

And worse was to follow for Adil Rashid (2-36), Guptill bringing up his fifty by slog-sweeping the spinner over the ropes between deep midwicket and long-on. A second maximum followed off the next delivery for good measure.

Williamson, who ought to have been run out by Wood before he had scored, went one better than his colleague, the skipper plundering four sixes, with Liam Plunkett (0-33) and Wood his victims.

The captain reached his own half-century by clearing the boundary over deep midwicket, as a length ball outside off from Wood was seized upon with relish.

Guptill eventually slipped up when he paddled Rashid's low full toss outside leg stump to Plunkett at fine-leg.

And Williamson was dislodged when Chris Jordan (1-34) beat the bat and hit off stump via the batsman's pads, but the damage was already done.

Man of the Match Kane Williamson - 'It was an important win in the context of the series' #nzvengpic.twitter.com/R2ZjOR0Ejx

England attempted to follow the example set by the hosts' big-hitters in their reply, albeit without the same success.

Alex Hales raced to 47 from just 24 deliveries, thanks to six fours and three maximums before he was caught by Colin de Grandhomme at deep midwicket off Sodhi (2-49).

And Dawid Malan, in putting on 65 for the second wicket with Hales, top scored for his side to no avail.

Two sixes and six fours saw Malan notch 59, with the highlight a huge slog sweep deep into the crowd behind cow corner off Sodhi.

Santner (2-29) gained revenge for his affronted team-mate, with the help of a Boult catch at long-on.

Boult (2-46) accounted for Jordan and Plunkett as England's tail offered little resistance, potential middle-order saviours James Vince (10) and Willey (21) having both been run out.

New Zealand will now face Australia in Auckland on Friday, before taking on England again in Hamilton two days later.