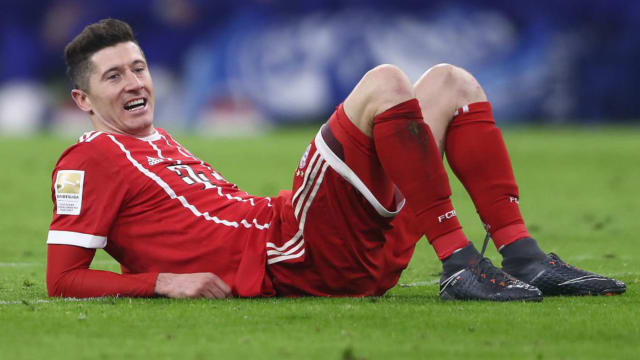 Bayern Munich provided the perfect tonic for absent manager Jupp Heynckes as they restored their 18-point cushion at the Bundesliga summit with a 2-1 victory over Schalke on Saturday.

Robert Lewandowski equalled Heynckes' record of scoring in each of his side's first 11 home league games this season as he put the hosts ahead in the sixth minute at the Allianz Arena.

However, the Bavarians' boss was not present to witness the historical moment; struck down by flu, the 72-year-old remained at home as assistant coach Peter Hermann took charge.

Schalke belied their recent poor run of form with an impressive display on the road, yet Domenico Tedesco's side have now picked up just four points from their five games since the winter break.

They recovered from the early setback of conceding to equalise through Franco Di Santo, only for Thomas Muller to catch out goalkeeper Ralf Fahrmann from a tight angle and restore Bayern's lead before the break.

Bayern were below-par in the second half, but held firm to clinch a 12th straight win in all competitions and continue their imperious march towards a 28th title in Germany.

FULL TIME!
Schalke made us work hard for it, but all three points stay in Munich! #FCBS04#MiaSanMiapic.twitter.com/7wNA33Z2ln

Lewandowski did not waste any time in equalling Heynckes' record, set back in the 1972-73 season, reacting quickly to tuck home the rebound after Fahrmann had only parried Muller's rising shot straight up in the air.

Yet the early opener was sandwiched in between two excellent chances at the other end, as Schalke demonstrated a willingness to fight fire with fire at the home of the runway leaders.

Breel Embolo ended a swift counter-attacking move with a low drive that drew a smart save out of Sven Ulreich, while the Bayern goalkeeper was grateful to see visiting defender Thilo Kehrer miss the target with a towering header from a corner.

Schalke's adventurous approach was eventually rewarded with a deserved equaliser from Di Santo, his sweetly struck half-volley whistling into the bottom left corner of Ulreich's net after the Bayern-bound Leon Goretzka had failed to connect with an ambitious bicycle kick.

Parity did not last long, though. Muller nudged Bayern back in front seven minutes later with a goal that caught out Fahrmann.

The home team's captain appeared to be aiming for a team-mate when cutting the ball back from the byline on the right, only to instead poke the ball between the goalkeeper and his near post.

Still, Heynckes will have found his side's start to the second half tough to watch from his sick bed.

The home crowd held their breath when Guido Burgstaller fell under pressure from Ulreich until referee Tobias Stieler brandished a yellow card to the flattened forward for simulation, a decision that was soon vindicated by replay footage.

Embolo fluffed his lines when found in space at the back post soon after, scuffing a weak effort with his left foot when he had time to take a touch, as Schalke fell short in their attempts to draw level for a second time.