I can't tell you what he said: Guptill reaction raises laugh from Taylor 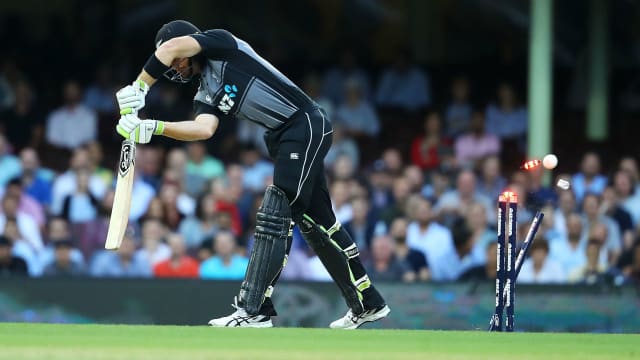 New Zealand endured misery in the first game of their Twenty20 tri-series with Australia and England, but Ross Taylor was able to raise a smile in the post-match news conference.

The Black Caps were limited to a paltry total of 117-9 at the Sydney Cricket Ground as Billy Stanlake (3-15) and Andrew Tye (4-23) excelled, before Australia raced to a rain-revised target of 95 with seven wickets in hand.

Tall seamer Stanlake produced a magic ball to dismiss Martin Guptill for a golden duck, hitting the top of the batsman's off stump to claim his second wicket in as many balls.

Asked for his team-mate's reaction to the delivery, a laughing Taylor indicated Guptill's comments were not suitable for a family audience.

Some gold from @RossLTaylor when asked about Martin Guptill's response to THAT delivery from Big Billy Stanlake #AUSvNZpic.twitter.com/Lw5MOupITa

"I can't really tell you what he really said," Taylor stated.

Australia face England in the series' next two contests, on Wednesday and Sunday, before Eoin Morgan's side meet the Black Caps in Wellington on February 13.