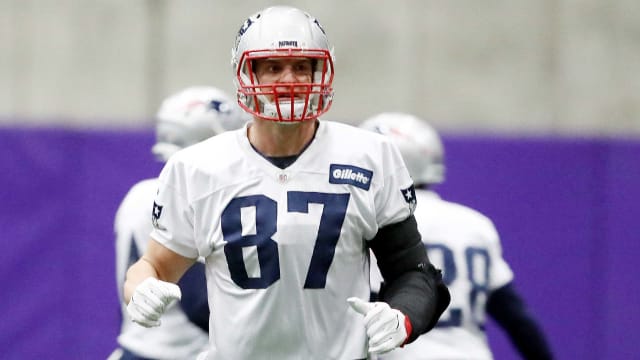 Rob Gronkowski has officially been cleared to play in Super Bowl LII.

The New England Patriots tight end is out of the concussion protocol and practiced Thursday ahead of Sunday's game against the Philadelphia Eagles.

"I knew it was going to happen," Gronkowski said Thursday in his first media availability since suffering a head injury in the AFC championship game against the Jacksonville Jaguars on January 21.

"I knew going through the protocol, whatever the standards were, whatever they had me do throughout the week. I would say they were more on the cautious side of getting me out there right away with the bye week in between," Gronkowski added.

"That definitely helped out big time, but I just went step-by-step every day and everything went smooth.

"I officially got the word today that I was cleared. It was super nice to hear from the doctors and I'm ready to roll."

Gronkowski led the Patriots with 69 receptions for 1,084 yards and eight touchdowns during the regular season.

He had seven catches for 102 yards and a score in the playoffs until he left in the second quarter of New England's 24-20 win over the Jaguars in the AFC title game after getting hit by Jaguars safety Barry Church.

Gronkowski missed last year's Super Bowl victory over the Atlanta Falcons with a back injury, but said the Patriots knew all week he would be okay to play in this year's title game.

"I'm feeling pretty good, definitely. It feels good to be out on the field and out there with my teammates," Gronkowski said. "I'm super excited."

Gronkowski said he will be "full speed" without any limitations against the Eagles.

When Patriots coach Bill Belichick was asked about Gronkowski being cleared to play, he gave a typical Belichick response: "Yeah, it's great. Glad to have everyone back. It is what it is."