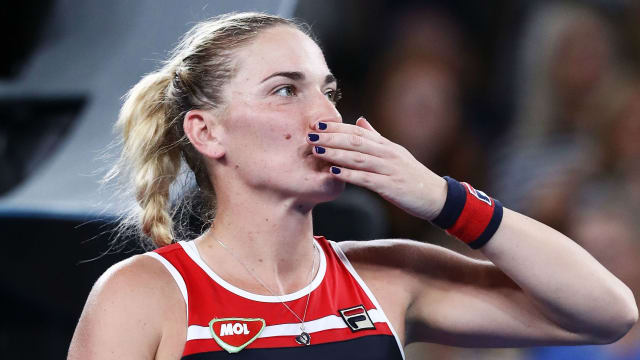 Timea Babos eased past Arina Rodionova in her first singles match since being crowned Australian Open doubles champion, but sixth seed Zarina Diyas crashed out of the Taiwan Open on Wednesday.

Babos claimed her maiden grand slam title along with Kristina Mladenovic at Melbourne Park last Friday and was runner-up in the mixed doubles final partnering Rohan Bopanna at the first major of the year.

The Hungarian made a smooth switch back to singles in Taipei, the fourth seed hitting 30 winners and breaking twice in each set to defeat Rodionova 6-3 6-2.

Peng Shuai, Zhang Shuai and Samantha Stosur - the top three seeds - all suffered-first round defeats and Diyas was sent packing in the second round on day three.

Monica Niculescu accounted for the sixth seed, who was beaten 6-0 1-6 6-4 by the unseeded Romanian.

Niculescu will face Sabine Lisicki in the quarter-finals after the German won her second match since recovering from a knee operation, seeing off Nao Hibino 6-4 6-1.

Yulia Putintseva and Kateryna Kozlova also reached the last eight, while Dalila Jakupovic got past Lizette Cabrera to set up a second-round contest with Babos.